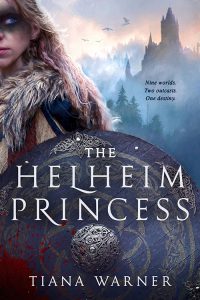 Norse mythology, a main character determined to prove herself and fantasy action in a journey to the underworld. The Helheim Princess is sure to please readers who love mythology-driven fantasy.

Sigrid might have been born in the Valkyrie ward but she’s not a Valkyrie. The Junior Valkyries in training and the General make sure she knows her true place in life. A stable hand, with a Midguard horse and no future in the Valkyrie ranks. Sigrid is determined to prove them wrong. She knows her horse is fast and that the secret training they’ve been doing makes them an asset to the army, even if it’s only from the ground. But when an army of Night Elves invade and steal a precious relic, Sigrid takes her chance to fulfil her destiny. Joining with an enemy Valkyrie, Sigrid travels to the Underworld. But more than just destiny awaits her there.