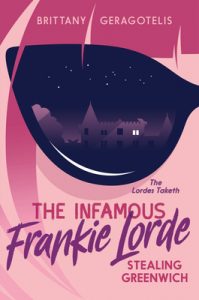 Frankie Lorde and her dad have been a team for as long as Frankie can remember. Being a tutor under the man responsible for some of the world’s biggest heists has given Frankie a unique perspective on the world. And a special set of life skills. Frankie can spot an FBI agent in a second. Pick a lock in two seconds. Steal a Bugatti in three. Then dad is arrested.

Frankie is sent to live with her uncle, her dad’s brother who she barely knows, and is, ironically a cop. Now Frankie has to go to middle school, learn what suburban kids wear and eat. But also ironically, Frankie is in Greenwich, CT, one of the richest towns in America. Seeing the starkness of super rich and the super not rich who support the community gives Frankie an idea. How to use her skills for doing good, to even the score…

Looking for a middle grade heist novel? Stealing Greenwich is a whole lot of fun and Frankie Lorde might just be the heroine you are looking for. She’s smart, clever, very good at disguises and knows how to run a con. This is the first book in a new and exciting series. With a good moral understory to justify the heists, this is a fun story for middle-grade readers, perfect for fans of Ally Carter’s Heist Society and heist novels.

Frankie Lorde and her dad are a team, taking on heists all around the world. When her father is captured and jailed, Frankie is sent to live with her uncle. Her uncle who is a cop. He has just a few house rules, one of which is no illegal activity. For Frankie, the plan is to stay off everyone’s radar, survive middle school and wait until her dad is released. But when her uncle takes a case that seems horribly unfair, Frankie decides to do a bit of investigating. Maybe she can turn her skills to a good cause?

I really enjoyed this novel. It is clearly the first in a series and sets up what we need to know about Frankie. The heist action doesn’t start until much later in the story. I did like that, while Frankie and her dad steal for profit, the case Frankie takes on in Greenwich is for the greater good, with no personal gain for herself. It raises a point about morals – stealing from the rich to benefit the poor, stealing from someone who is corrupt, opens up some great points that would be perfect for discussion.