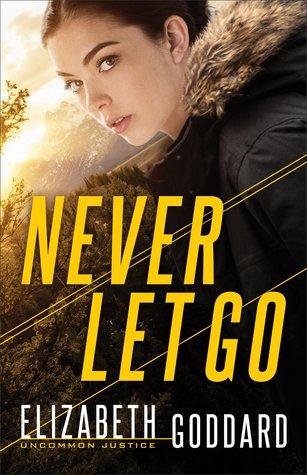 As a forensic genealogist, Willow Anderson is following in her late grandfather’s footsteps in her quest for answers about a baby abducted from the hospital more than twenty years ago. The case may be cold, but things are about to heat up when someone makes an attempt on her life to keep her from discovering the truth.

Ex-FBI agent–and Willow’s ex-flame–Austin McKade readily offers his help to protect the woman he never should have let get away. Together they’ll follow where the clues lead them, even if it means Austin must face the past he’s spent much of his life trying to forget. And even if it puts Willow’s tender heart at risk.

Never Let Go is the first book in a new inspirational suspense series by new-to-me author Elizabeth Goddard. While the synopsis for Never Let Go was intriguing and the prologue had me hooked, I sadly lost interest in this story as it progressed. Introspection heavy, the characters spend a lot of time thinking and then rethinking things, making it hard for me to stay focused on the story. While I am sure some readers will love this book with its mix of tension, second-chance love story, and complex mystery, it wasn’t a book that held my attention.

END_OF_DOCUMENT_TOKEN_TO_BE_REPLACED

Book Review: True To You

After a devastating heartbreak three years ago, genealogist and historical village owner Nora Bradford has decided that burying her nose in her work and her books is far safer than romance in the here and now.

Unlike Nora, former Navy SEAL and Medal of Honor recipient John Lawson is a modern-day man, usually 100 percent focused on the present. But when he’s diagnosed with an inherited condition, he’s forced to dig into the secrets of his past and his adoption as an infant, enlisting Nora to help him uncover the identity of his birth mother.

The more time they spend together, the more this pair of opposites suspects they just might be a perfect match. However, John’s already dating someone and Nora’s not sure she’s ready to trade her crushes on fictional heroes for the risks of a real relationship. Finding the answers they’re seeking will test the limits of their identity, their faith, and their devotion to one another.

True To You was part light and whimsical romance and partly a story of serious adversity and hard-hitting secrets that force the characters to be honest with themselves and God as they search for answers and love.

Nora Bradford is a historian. A researcher. Someone who enjoys all things past. But her own past, particularly her romantic past, has left her slightly jaded, more than happy to remain safely single, and determined to rely on no one but herself for success. John Lawson knows what it’s like to test himself and push himself to the very limits. Being a Navy SEAL ensured that. But a medical diagnosis has rocked him and driven him to uncover his own past and the story of his adoption. Nora and John are brought together by the past and enticed by a chance for the future.

True To You was light and whimsical and fluffy. A delicious book to enjoy. It felt the littlest bit silly and wholly charming. And then, with a quarter of the book to go, a huge bombshell is landed. Wow!! I did not see that coming. Nor did the characters. But that’s exactly when this book digs its heels in and becomes so much more than a fluffy romance – nothing wrong with those, of course – but with that twist this book looks deeper at God and accepting God’s plans for one’s life even when there seems to be only hurt and pain ahead.