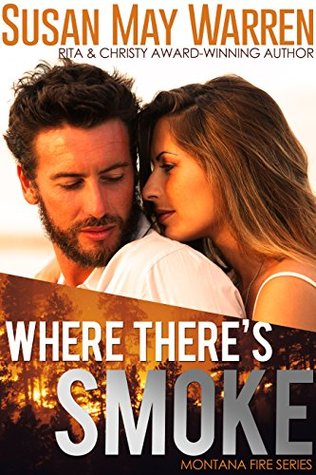 She’s a smokejumper afraid of fire…

Kate Burns is a legendary smoke jumper, known for her courage and willingness to risk everything to get the job done. Only she has a secret, one she won’t admit to anyone.

He can’t forget the love they once shared…

Supervisor Jed Ransom commands the Jude County Smoke Jumpers with a reputation as a calm, level-headed leader. Kate is the only one who’s ever gotten under his skin.

They must face the flames together…

A raging wildfire in the mountains of Montana brings Kate and Jed together to train up a new team of jumpers. Suddenly, they must face the past they’ve been running from and the secrets that keep them apart. When an arsonist goes after their team, Kate and Jed must face their deepest fears—and learn to rely on each other as they fight a blaze that could destroy them all.

Where There’s Smoke is an exciting and spark-filled romance.

It was stressful reading Where There’s Smoke, but in a good way. I was on edge most of the time with jumping from planes, parachutes that won’t open, tangled chute lines and deadly wildfires. And when all that wasn’t happening the tension from the romance is off the charts.

Kate grew up wanting to be a smokejumper just like her father, fighting the deadly fires that roar through the Montana landscape. But her father never wanted her in such danger, so she chose to walk away from their relationship rather than give up fire fighting. Now, Kate has returned home in the wake of a devastating fire that has left her father and others in his crew dead. She finally has a chance to join the Jude County Smokejumpers, but so too has her old crush, Jed Ransom, leaving Kate once again battling to prove her ability to be a jumper.