Book Review: In the Penalty Box 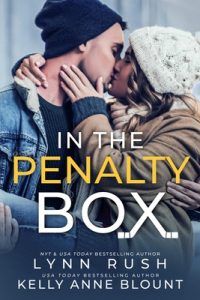 Willow Covington has conquered every obstacle thrown at her to become one of the best figure skaters in the nation, until a devastating injury shatters her Olympic dreams. Instead of hanging up her skates, she switches to hockey; blocking shots and slapping the puck around takes her love of the ice to a whole new level, and suddenly she has a new goal—earning a hockey scholarship to Boston College. If only the team, especially the super talented (and, okay, hot) Brodie Windom, wasn’t so frigid toward her…

Hockey sensation Brodie Windom has one goal for his senior year: to win the state tournament, which would secure a spot on the famed Boston College hockey team. His eyes are on the prize and there’s no room for distractions—until figure skater Willow Covington joins the team and throws him off his game.

Despite not playing or watching sport, I love reading sport novels. There is a just such a great mix of adrenaline, action, team dynamics, hard work and – usually – romance. In The Penalty Box ticks all those boxes.

Willow is a figure skater – it’s all she has worked towards and dreamed about. Until, that is, she injured her Achilles. Dropped by her team, Willow is surprised to be asked to help at the local pick-up hockey game. What began as a few moments of fun turns serious when she tries out for the team. There is also the matter of the very cute team captain – and the no dating team mates rule.

From the cover I initially thought this was an adult or a new adult novel. When I saw it was YA, I quickly added it to my to-read pile. I still thought it would be more mature that it was – despite the characters being at the upper level of high school, it still has a youthful, juvenile vibe. Which is absolutely fine, just not a mature as I expected from the cover.