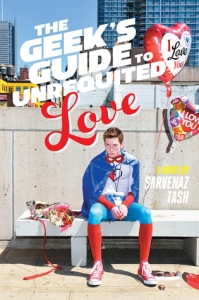 Graham met his best friend, Roxana, when he moved into her neighborhood eight years ago, and she asked him which Hogwarts house he’d be sorted into. Graham has been in love with her ever since.

But now they’re sixteen, still neighbors, still best friends. And Graham and Roxy share more than ever—moving on from their Harry Potter obsession to a serious love of comic books.

When Graham learns that the creator of their favorite comic, The Chronicles of Althena, is making a rare appearance at this year’s New York Comic Con, he knows he must score tickets. And the event inspires Graham to come up with the perfect plan to tell Roxy how he really feels about her. He’s got three days to woo his best friend at the coolest, kookiest con full of superheroes and supervillains. But no one at a comic book convention is who they appear to be…even Roxy. And Graham is starting to realize fictional love stories are way less complicated than real-life ones.

Set over three days at the New York Comic Con, this is a fun and yet touching story of friendship, the adoration of all things sci-fi and fantasy, drawn, filmed and written, and the heartbreak that comes with loving someone who may not love you back.

Graham and Roxy have been best friends for years. They share everything, from their love of Harry Potter to their love of the comic the Chronicles of Althena. So when Graham realises that he feels more for Roxy than just friendship, he decides that the comic con is the perfect place to reveal his new-found feelings. But the course of love never did run smooth, and Graham has his work cut out for him.