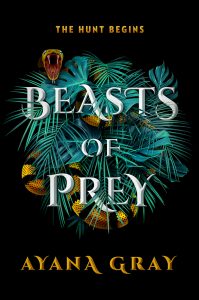 A lush fantasy, Beasts of Prey is a beautiful as that cover (prettyyyy….). Beasts of Prey is set in an African-inspired fantasy world (and I loved that the author shared the significance of the mythology, culture and languages used in the world in her author’s note).

Koffi is an indentured servant. She and her mother are just months away from paying off their family debt and finally free themselves from the Night Zoo, where they work as beast keepers. But just when freedom is almost within their grasp, a dangerous power Koffi doesn’t truly understand, let alone know how to control, changes everything. Now she must journey into the Greater Jungle to face the most dangerous beast in the land. Ekon is just one task away from finally becoming a Son of the Six, an elite warrior. But when Ekon allows Koffi to escape from the Night Zoo and is shamed and forbidden from completing his entry into the warrior class, Ekon and Koffi unwillingly team up to hunt down the Shetani – the most feared beast in the land.