Book Review: Where We Begin 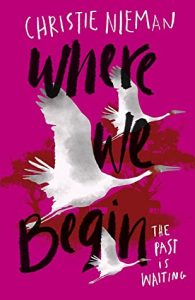 Seventeen-year-old Anna is running into the night. Fleeing her boyfriend, her mother, and everything she has known.

She is travelling into the country, to the land and the grandparents she has never met, looking for answers to questions that have never been asked.

For every family has secrets.

But some secrets – once laid bare – can never be forgiven.

Where We Begin is a beautiful story about belonging.

Where We Begin weaves into its story powerful truths about the history of Australia, racism, teenage relationships, family and domestic violence, alcoholism and its effects, and storytelling. The title makes so much sense to so many aspects of the story once you’ve read the book. Honestly, there is so much to love about this book, from our studious and determined main character who is thrown into a spin over her new circumstances, the trauma she has experienced throughout her childhood and the new pain she experiences as she learns the truth about her family and past.

END_OF_DOCUMENT_TOKEN_TO_BE_REPLACED

Luke feels like he’s been looking after Toby his entire life. He patches Toby up when Toby’s father, a drunk and a petty criminal, beats on him, he gives him a place to stay, and he diffuses the situation at school when wise-cracking Toby inevitably gets into fights. Someday, Luke and Toby will leave this small town, riding the tails of Luke’s wrestling scholarship, and never look back.

But during their senior year, they begin to drift apart. Luke is dealing with his unreliable mother and her new boyfriend. And Toby unwittingly begins to get drawn into his father’s world, and falls for an older woman. All their long-held dreams seem to be unraveling.

We’ll Fly Away is a well-written, hard-hitting YA novel with important messages about poverty, child abuse, the justice system, and friendship. I knew We’ll Fly Away would be heartbreaking. I also expected it to be raw, upfront, exposed, and almost crude. It certainly is an unflinching book, with threads of hope (but mainly heartbreak) and a positive message.

Luke and Toby are best friends – the only ones to see inside the truths of the other’s life, the only ones who could understand. But Luke struggles to maintain his wrestling record for a college scholarship with his mother’s ever increased neglect and caring for his two younger brothers, and Toby falls into a relationship with an older woman while continuing to face his father’s abuse. Events will come to a head as the boys fight for their friendship, their future, and their freedom.

END_OF_DOCUMENT_TOKEN_TO_BE_REPLACED

It’s senior year, and Hadley and her best friend, Magda, should be starting the year together. Instead, Magda is dead and Hadley is alone. Raped at a party the year before and humiliated, Magda was driven to take her own life and Hadley is forced to see her friend’s attackers in the classroom every day. Devastated, enraged and needing an outlet for her grief, Hadley decides to get a little justice of her own.

Donning a pink ski mask and fueled by anger, Hadley goes after each of the guys one by one, planning to strip them of their dignity and social status the way they did to Magda. As the legend of the pink-masked Vigilante begins to take on a life of its own, Hadley’s revenge takes a turn for the dangerous. Could her need for vengeance lead her down a path she can’t turn back from?

I have always loved Kady Cross’ series The Steampunk Chronicles, so I was very excited to read Vigilante – a change in genre but a book that sounded incredibly intense and with an interesting way to approach the subjects of sexual assault and a community’s response to rape.

Hadley’s best friend Magda was raped by four classmates. A few months later, Magda is dead, having taken her own life. Hadley is left with a drowning sense of grief and guilt. She has to see the four boys in her classroom everyday as the four of them were never charged. When a sudden opportunity arises, Hadley decides to create some of her own justice and plans to go after each of the boys who hurt her friend. But when a video of her going after the first guy in a pink ski mask goes viral, the Pink Vigilante is born and Hadley’s journey for revenge gets much bigger than she ever imagined.

Let me just say, some of the people of Hadley’s town and school totally deserved everything Hadley dished out to them, and more. Corrupt systems biased by influence and money are no doubt, sadly, very realistic in many cases. But I liked how so many people started to rally behind the Pink Vigilante. But that begs the question, did some people do that because they wanted to stop violence towards women or because it involved violence? This book will spark many important discussions, things that need to be talked about and not shuffled to the dark, hidden corners of our world.