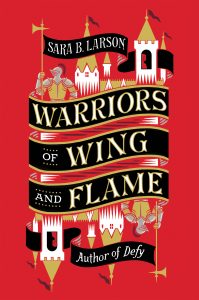 The doorway between the magical Visempirum and the human world has been reopened. Paladin are once more living in the citadel where Zuhra and Inara grew up completely isolated by the magical hedge that trapped them there. Amidst the brewing conflict between the Paladin and humans looms the threat of Barloc, who has stolen Inara’s immense power and continues to elude the Paladin who are desperately searching for him.

In this sequel to Sisters of Shadow and Light, Inara and Zuhra must navigate the treacherous paths of self-discovery, their love for each other, and for the boys who have captured their hearts. Together, they search for the strength within themselves to bridge the divide between the two worlds they inhabit, even as war threatens to destroy everything—and everyone—they love.

Warriors of Wing and Flame is the second and last book in the Sisters of Shadow and Light duology. I very much enjoyed this conclusion to the series, enjoyed the mix of fantasy action (big battle scenes) and character growth.

Zuhra has returned home, bringing with her her long-lost father and teams of Riders with their gryphons. But they must now face the devastation they found upon their return. Inara is reeling from the loss of her powers and the Paladin are desperately trying to track down the man who stole them and who now poses a risk to both worlds and both Paladin and humans. Everything the sisters have finally gained could be threatened if they don’t act quickly.

END_OF_DOCUMENT_TOKEN_TO_BE_REPLACED

For fifteen years they have lived, trapped in the citadel, with little contact from the outside world…until the day a stranger passes through the hedge, and everything changes.

What a beautiful book. Sisters of Shadow and Light is everything I love about fantasy novels. It actually reminds me of a grown-up version of The Two Princesses of Bamarre by Gail Carson Levine, one of my all-time favourite fantasy novels. Sisters of Shadow and Light has so many elements woven together: a sisterly bond that is incredibly strong, a family torn apart and devastated by grief, a barrier between worlds, a magical world with monsters and griffins and magical powers, a fairytale feeling that is both dark and powerful and hopeful and light in the way that only fairytales can be, and some really strong, swoony romance. It’s also a duology!!! And I can’t wait to get my hands on the second book.

Zuhra would do anything for her sister, Inara. She can’t take away the constant roar that drowns out anything else for her sister, leaving her unable to communicate and do little more than mindlessly tend to the garden in their hidden citadel, the citadel that once housed the Paladin – magical warriors who rode winged griffins. She can’t make their cold, distant mother, broken-hearted since their Paladin father disappeared on the night Inara was born, care for her sister. She can’t free them from the living hedge that surrounds their home, protecting the from the people outside, but also trapping them securely within its borders. So when the hedge unexpected allows a young scholar to enter, Zuhra risks encountering her mother’s wrath by asking Halvor to share his knowledge of the Paladin and their magic, in the hopes of freeing Inara and herself from the things that hold them captive.