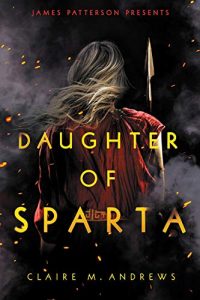 Seventeen-year-old Daphne has spent her entire life honing her body and mind into that of a warrior, hoping to be accepted by the unyielding people of ancient Sparta. But an unexpected encounter with the goddess Artemis—who holds Daphne’s brother’s fate in her hands—upends the life she’s worked so hard to build. Nine mysterious items have been stolen from Mount Olympus and if Daphne cannot find them, the gods’ waning powers will fade away, the mortal world will descend into chaos, and her brother’s life will be forfeit.

Guided by Artemis’s twin-the handsome and entirely-too-self-assured god Apollo-Daphne’s journey will take her from the labyrinth of the Minotaur to the riddle-spinning Sphinx of Thebes, team her up with mythological legends such as Theseus and Hippolyta of the Amazons, and pit her against the gods themselves.

For every reader who loved Percy Jackson or Greek Mythology, Daughter of Sparta is the book for you. I get so many requests in my school library for books that feature mythology, especially Greek mythology. Daughter of Sparta is a thrilling adventure. It is fresh yet fans of the mythological legends will recognise some familiar characters and quests.

There is so much in this story. The author could have used just one legend to inspire the story but we have multiple, with multiple gods, creatures and challenges that Daphne must face. It makes this book endlessly engaging and there is never a dull moment. I did find it a little confusing to keep track of all the characters, but having the familiar Greek gods and characters was helpful.