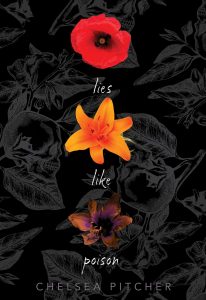 Poppy, Lily, and Belladonna would do anything to protect their best friend, Raven. So when they discovered he was suffering abuse at the hands of his stepmother, they came up with a lethal plan: petals of poppy, belladonna, and lily in her evening tea so she’d never be able to hurt Raven again. But someone got cold feet, the plot faded to a secret of the past, and the group fell apart.

Three years later, on the eve of Raven’s seventeenth birthday, his stepmother turns up dead. But it’s only belladonna found in her tea, and it’s only Belladonna who’s carted off to jail. Desperate for help, Belle reaches out to her estranged friends to prove her innocence. They answer the call, but no one is prepared for what comes next.

Now, everyone has something to lose and something equally dangerous to hide. And when the tangled web of secrets and betrayal is finally unwound, what lies at its heart will change the group forever.

I love, love YA mysteries and Lies Like Poison was just as compelling, twisty, and intriguing as expected but totally surprised me with its complex romance and relationships.

Belle and Poppy had a plan to save their friend Raven from his evil stepmother. Circumstances forced them to abandon their plan. Now, years on, Raven’s stepmother has been murdered – using Belle and Poppy’s plan. Only one other person knew and now Lily, Poppy (aka Jack) and Belle must decipher the secrets of the past and present if they are to find the person responsible and clear their own names.

The romance in this book is less like a love triangle and more like a triangle crossed with a venn diagram. I’m not going to label any of the characters or their relationships – they are just figuring out who they are and what they want and labels aren’t helpful here, but suffice to say they all fall under the LGBTQIA+ banner. A chunk of the story is actually devoted to the characters going through their ‘coming out’ process as well as becoming more accepting of themselves and each other. END_OF_DOCUMENT_TOKEN_TO_BE_REPLACED