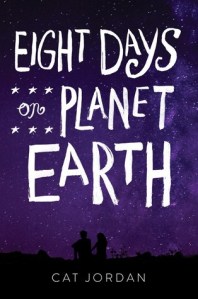 I would like to welcome author Cat Jordan to my blog. Cat is the author of two young adult novels, The Leaving Season and Eight Days on Planet Earth, due for release  November 7, 2017.

Both The Leaving Season and Eight Days on Planet Earth are incredible books, that tackle high emotions with finesse

Eight Days on Planet Earth is a realistic yet otherworldly novel – magical, funny, and a little heartbreaking about Matty, a guy who discovers a girl in the field next door. She claims to be an alien visiting from another planet. Matty is sure there is more to her story and can’t help but be intrigued.

You can find my full review of Eight Days on Planet Earth here, and The Leaving Season here.

Keep reading for information on how you can enter to win some of these cute ‘Believe’ buttons.