Analyn Sanchez can handle the long hours and arrogant clients that come with her job as a crisis management associate at Denver’s largest publicity firm. The high-powered job, expensive condo, and designer wardrobe are all part of her plan to prove to her family that her life choices haven’t been in vain. But when she’s asked to cover up a client’s misdeeds with serious moral and legal ramifications, she can no longer sacrifice her conscience for her career . . . and the cost is no less than her job.

Ever since a devastating climbing accident in South America eight months ago, and a bad decision that dried up his sponsorships, professional rock climber Bryan Shaw has found himself at similar loose ends. When the opportunity to buy a coffee farm in Colombia arises, he jumps on it–only to discover his wandering ways have left him utterly unprepared to run a business.

When Bryan returns home and offers Ana a role in his company as a solution to both their problems, she’s desperate enough to consider working with the far-too-flippant and far-too-handsome climber, even though he’s the polar opposite of her type A nature. As they delve deeper into the business, however, she begins to suspect there’s much more to Bryan than she’s given him credit for . . . and that sometimes the best plans are the ones you never see coming.

The Solid Grounds Coffee Company is such a delightful novel. I adored books one and two in this series and I was so keen to read this one I pushed it to the top of my rather large reading pile. And I’m so glad I did. I seriously love this series and I fell in love with Ana, Bryan, their coffee company venture and their romance. This book has everything I need – good food, great friendship, passionate kisses, faith and so much heart. I highly recommend this book and highly recommend the entire Supper Club series.

This is a powerful story of second chances and learning from past mistakes. Bryan is very open about his past lifestyle and how he has now moved away from that. But he knows there are consequences and a long journey ahead of making different choices. Ana is only just starting to realise her life choices may not be want she actually wants, and she, too, has a past she’s kept very well hidden from the world. Ana and Bryan have far more in common than they realised and watching their friendship grow and mature, even as they fight the sparks of attraction, was so much fun.

END_OF_DOCUMENT_TOKEN_TO_BE_REPLACED 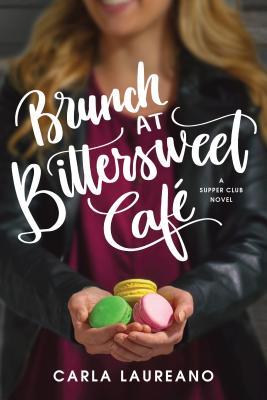 Baker and pastry chef Melody Johansson has always believed in finding the positive in every situation, but seven years after she moved to Denver, she can’t deny that she’s stuck in a rut. One relationship after another has ended in disaster, and her classical French training is being wasted on her night job in a mediocre chain bakery. Then the charming and handsome private pilot Justin Keller lands on the doorstep of her workplace in a snowstorm, and Melody feels like it’s a sign that her luck is finally turning around.

Justin is intrigued by the lively bohemian baker, but the last thing he’s looking for is a relationship. His own romantic failures have proven that the demands of his job are incompatible with meaningful connections, and he’s already pledged his life savings to a new business venture across the country—an island air charter in Florida with his sister and brother-in-law.

Against their better judgment, Melody and Justin find themselves drawn together by their unconventional career choices and shared love of adventure. But when an unexpected windfall provides Melody with the chance to open her dream bakery-café in Denver with her best friend, chef Rachel Bishop, she’s faced with an impossible choice: stay and put down roots with the people and place she’s come to call home . . . or give it all up for the man she loves.

END_OF_DOCUMENT_TOKEN_TO_BE_REPLACED

Denver chef Rachel Bishop has accomplished everything she’s dreamed and some things she never dared hope, like winning a James Beard Award and heading up her own fine-dining restaurant. But when a targeted smear campaign causes her to be pushed out of the business by her partners, she vows to do whatever it takes to get her life back . . . even if that means joining forces with the man who inadvertently set the disaster in motion.

Essayist Alex Kanin never imagined his pointed editorial would go viral. Ironically, his attempt to highlight the pitfalls of online criticism has the opposite effect: it revives his own flagging career by destroying that of a perfect stranger. Plagued by guilt-fueled writer’s block, Alex vows to do whatever he can to repair the damage. He just doesn’t expect his interest in the beautiful chef to turn personal.

Alex agrees to help rebuild Rachel’s tarnished image by offering his connections and his home to host an exclusive pop-up dinner party targeted to Denver’s most influential citizens: the Saturday Night Supper Club. As they work together to make the project a success, Rachel begins to realize Alex is not the unfeeling opportunist she once thought he was, and that perhaps there’s life–and love–outside the pressure-cooker of her chosen career. But can she give up her lifelong goals without losing her identity as well?

The Saturday Night Supper Club is simply delicious. Perfectly put together, this book surprised and delighted me, made me incredibly hungry, had me swooning and craving best-friend chats over waffles and coffee, and made it all too easy to fall in love with the characters, the charming setting, and the beautiful writing of Carla Laureano.

Rachel Bishop has worked tirelessly all her life to realise her dreams of running and owning her own restaurant. But a scathing critique, an online essay follow up, and an ill-timed comment are all it takes to bring her dreams, and her reputation, crumbling down around her. Alex Kanin never meant for his essay on the downsides of social media to have such a negative impact on a chef’s career. Determined to atone for his part in the whole thing, Alex apologises and offers to make it up to Rachel. Together, they hatch the idea of a supper club, him the host, Rachel the chef. But neither plan on the effect their partnership will have, both professionally and personally.