Book Review: Anything But Fine 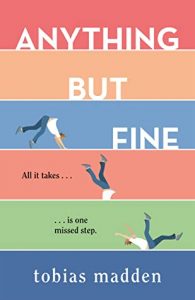 Ballet is everything for Luca. It’s his future, his time, all his effort and his friendships. So when he falls down the stairs at his ballet studio and breaks his leg, it changes everything. When the doctors say he will never dance again, Luca isn’t sure what that means for his future. Who is he without ballet. When he loses his scholarship and has to move school and he shuts out his friends, the only bright side is seeing Jordan at OT. Jordan is the school captain and rowing champion at Luca’s new school. Luca thinks there might be something between them but Jordan is apparently straight. And has a girlfriend.

Anything But Fine is authentically Australia, from the Ballarat setting, to the slang and high school culture. #LoveOzYA

One of the things I most enjoyed about this book was Luca’s friendship with Amina. Amina is nerdy, talks a lot and isn’t who Luca thought he would be spending time with. She’s also as different from his old friends as possible. Amina is Indonesian-Australian and Muslim. She is absolutely fantastic and just what Luca needs. Luca also learns to be a better friend to Amina and more deserving of her. He makes some pretty lousy mistakes in this book, both towards Amina and his old friends, as well as to his dad and other adults who have been there for him. But Luca isn’t afraid to own up to these mistakes and learn from them.