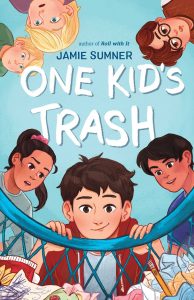 If you are looking for a middle grade novel about starting middle school, trying to fit in, making friends, and dealing with bullying, then One Kid’s Trash is the book for you. The inclusion of garbology as a mini superpower for our main character makes this realistic novel both unique and the perfect addition to your middle grade novel collection.

When Hugo’s parents drag him away from his school and friends so his dad can start a new career (as a ski lift operator!) it’s just one more thing Hugo has to deal with. Like being short. And the short jokes and bullying that come with being short. Not to mention his mother’s constant worrying about his health. Starting middle school is hard enough without having to start at a new school and make new friends and avoid new bullies. Hugo’s got his cousin Vij to show him around, but he knows he’s just doing it out of family obligation and when Vij reveals Hugo’s skills in garbology – the science of understanding someone from the contents of their rubbish bin – he knows  it’s only a matter of time until he before he becomes the laughing stock of the school.

END_OF_DOCUMENT_TOKEN_TO_BE_REPLACED 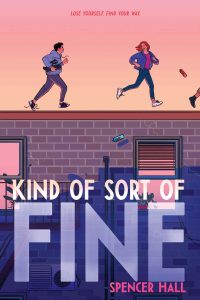 Senior year of high school is full of changes.

For Hayley Mills, these changes aren’t exactly welcome. All she wants is for everyone to forget about her very public breakdown and remember her as the overachiever she once was—and who she’s determined to be again. But it’s difficult to be seen as a go-getter when she’s forced into TV Production class with all the slackers like Lewis Holbrook.

For Lewis, though, this is going to be his year. After a summer spent binging 80s movies, he’s ready to upgrade from the role of self-described fat, funny sidekick to leading man of his own life—including getting the girl. The only thing standing in his way is, well, himself.

When the two are partnered up in class, neither is particularly thrilled. But then they start making mini documentaries about their classmates’ hidden talents, and suddenly Hayley is getting attention for something other than her breakdown, and Lewis isn’t just a background character anymore. It seems like they’re both finally getting what they want—except what happens when who you’ve become isn’t who you really are?

A story about surviving high school, with humour, honesty and a delightful freshness.

High school is tough – especially when you had a meltdown in front of the entire school and district. For Hayley, returning to school after she had a public breakdown in the school driveway is hard enough. When her parents and teachers decide that she is working too hard, she has to make a choice – drop tennis or drop her advanced placement courses. She drops tennis and is forced into TV production. She thinks it will be a joke. Instead, she is surprised to find herself having fun. She is teamed up with Lewis. For Lewis, senior year is the year he is finally senior producer at the school’s TV production class. It’s also going to be the year he recasts himself. No longer just the fat guy, Lewis has big plans.

When Hayley and Lewis are teamed up in TV production class, they seem like two opposites. Instead, they work really well together and they start to film documentaries that showcase the secret lives of their fellow students. It’s a bit of a journey of discovery for them both. Not only do they learn more about their classmates then they ever would have imagined, they also pushed themselves in new ways – physically and mentally and learnt more about themselves.