Using VR in the School Library

Have you ever used virtual reality? I have and it’s lots of fun. It’s also a fun way of bringing technology into the school library, connecting history and literature, health, geography or basically any subject and bringing it to life. 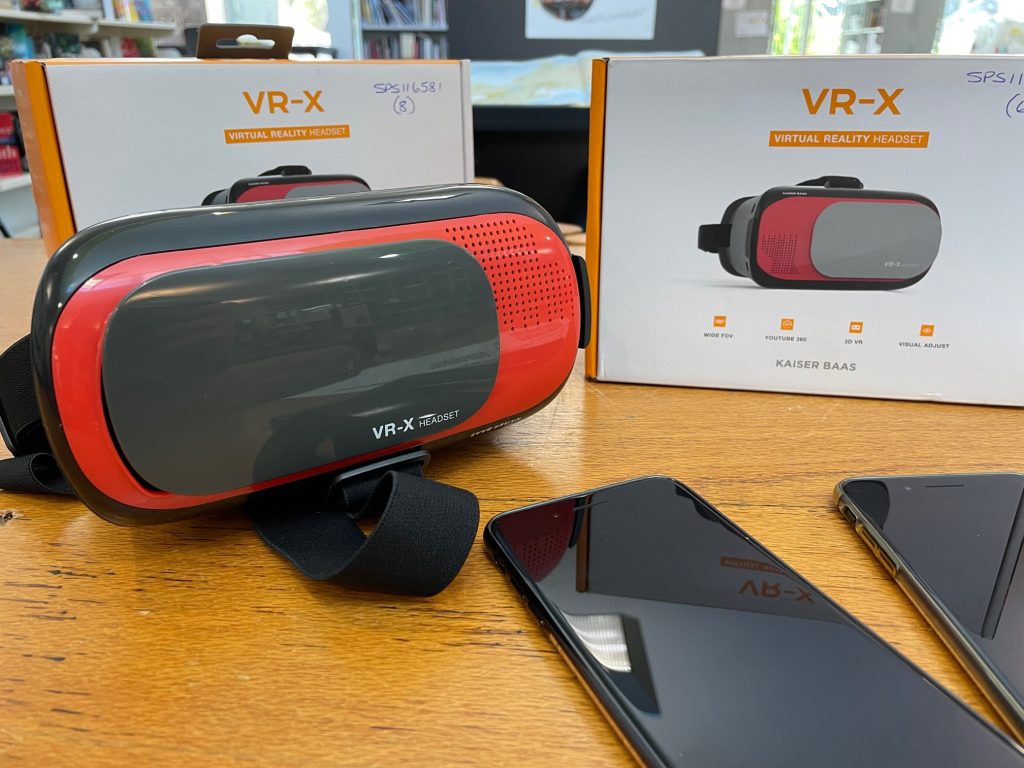 In one of the school libraries I have worked in, we had a really epic VR set-up. A custom built computer, VR headset with earphones and a tv showing what was happening inside the headset for those around to experience. While this was fantastic and of a really high quality, the set-up was super expensive, the ongoing cost for games was costly and it required a devoted space within the library, as the headset was connected to the PC by cord.

But, not every school library has the funds or space for a set-up like this and quite frankly, it was limited in its usability, as only one person at a time could take part and it couldn’t be moved. It also used up a big chunk of the library floor space.

There is a much easier, cheaper and more flexibly way to use virtual reality in a school library. In my current library, I discovered that the school had a large number of VR headsets, that were donated to the school. I quickly made sure I had access to some of these headsets. 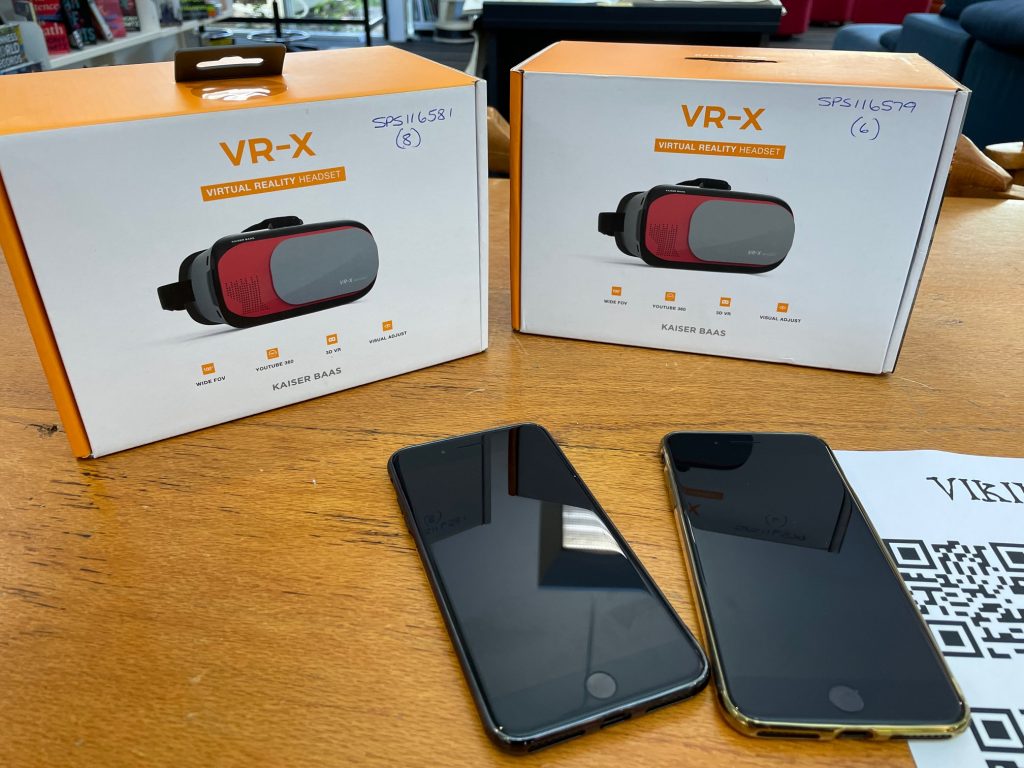 The headsets I have access to at my school are the Kaiser Baas VR-X headsets. These retail for $20 each. That, I think, is super affordable. What you need to know, though, is that they don’t actually create the VR or run any software. Much like Google Cardboard, they are just a headset with lenses that needs a phone to run the VR. That’s what make them so affordable, but you obviously don’t have the quality of set-ups like the Oculus or Vibe.

My school has three school phones used for excursions and photos of activities that I can use for the headsets. When we are using more than three headsets, students are asked to use their own phones. 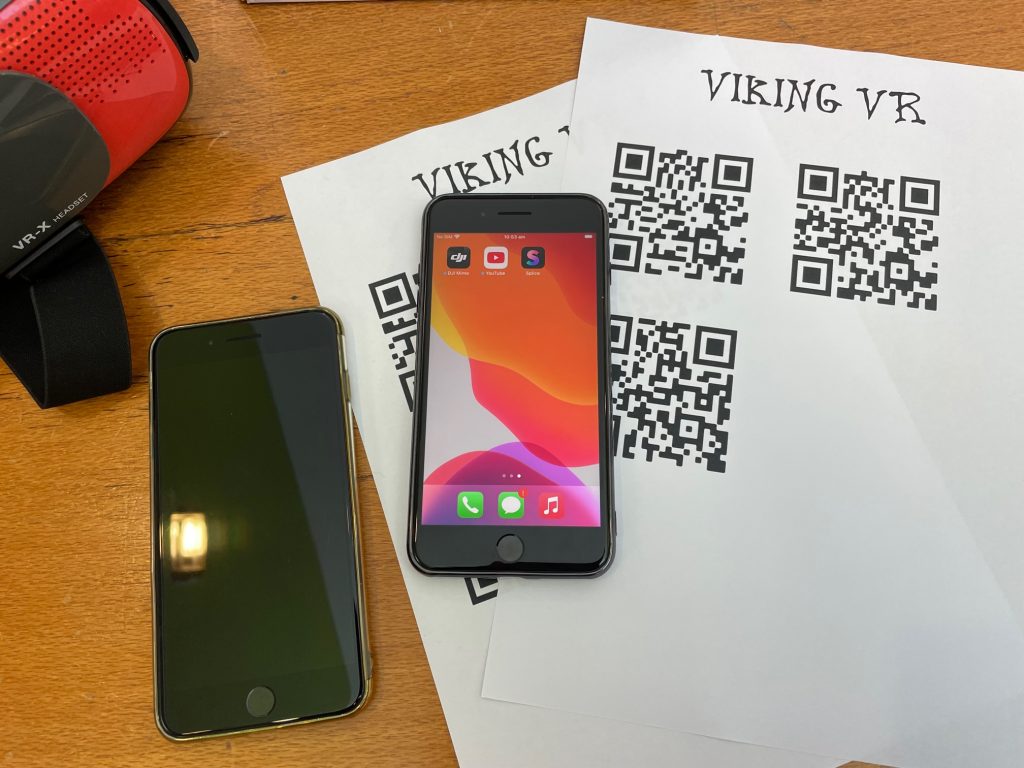 Actually, there is no software. Because the VR actually runs on a phone, you don’t need any software. I use 360 videos on Youtube. You can find these by searching VR videos or 360 videos. There are lots out there on a massive range of subjects. I then put the link to the video into the QR Code generator to create a QR code link. The students scan this on the phone (or their own device). Easy. 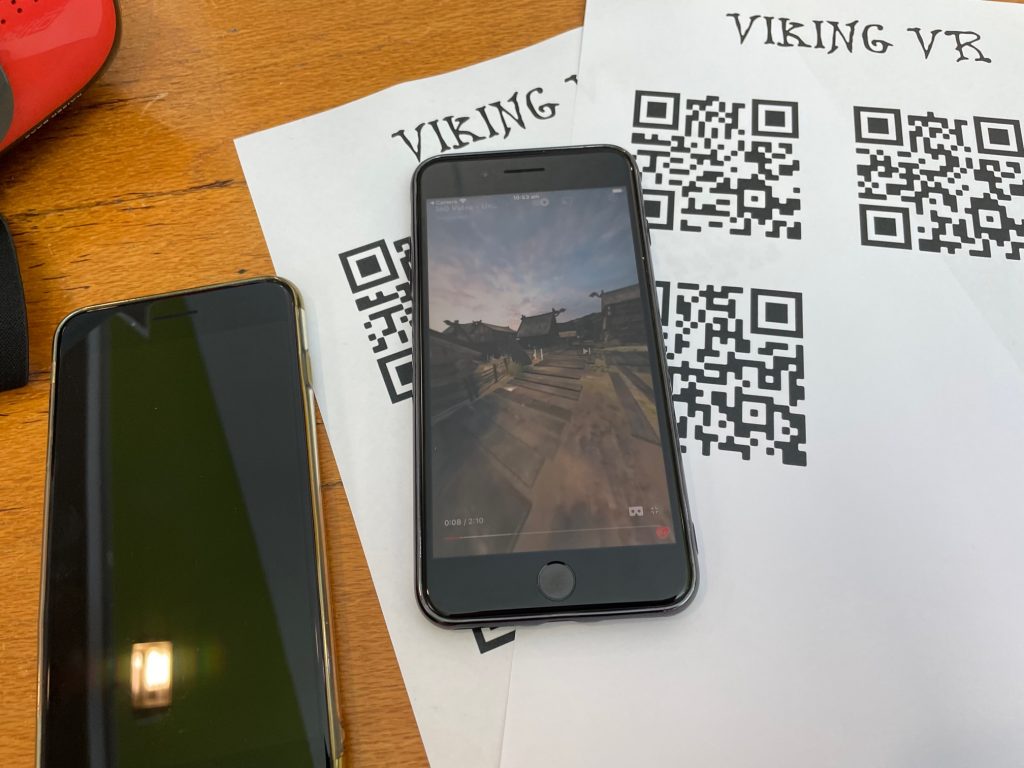 To make the video work in VR mode you need a video that is VR ready or you access the video in the YouTube app. Doing this gives you access to the VR headset button, which splits the screen into two. 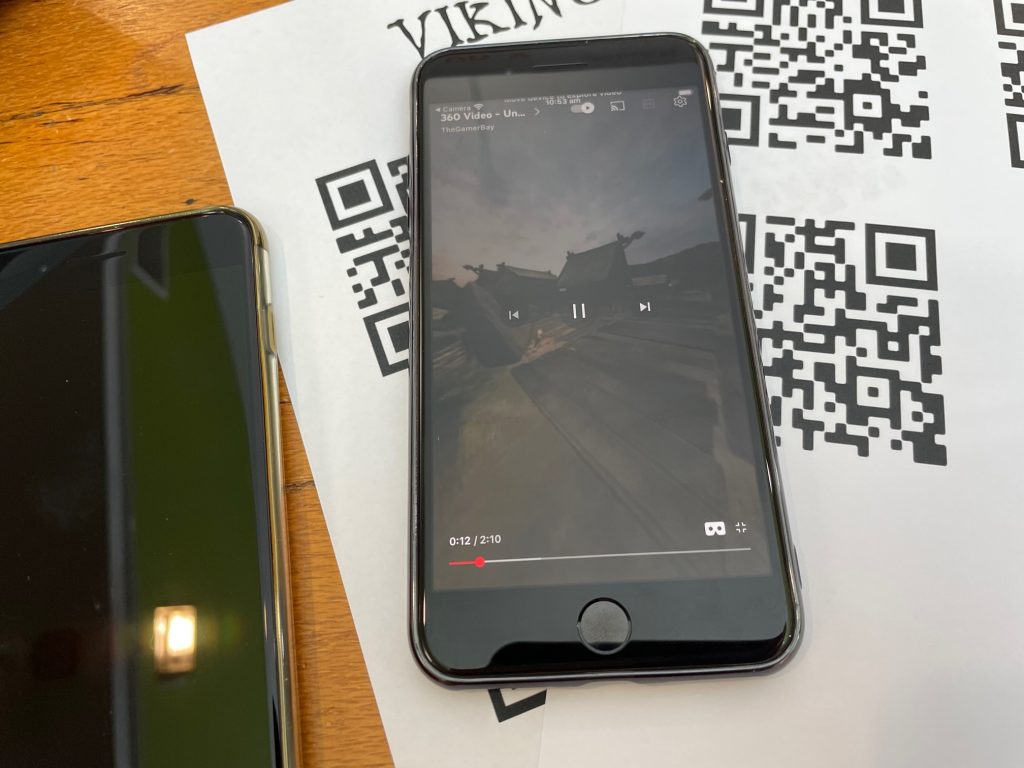 Once the screen is in this VR mode, you are ready to put the device into the headset. 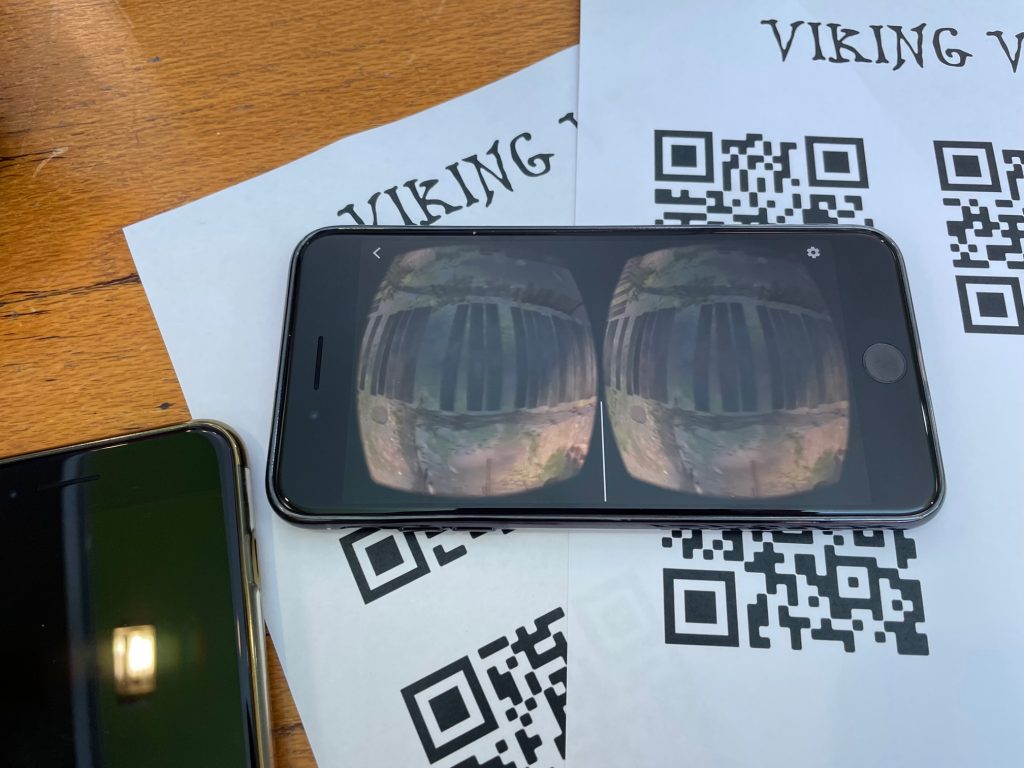 The headsets we have use a tray that holds the phone and this slides into the headset, where the lens turns it into VR. Magic. Of course, as there are no remotes or controls, you can’t interact, grab things or move things. This is low-tech VR. 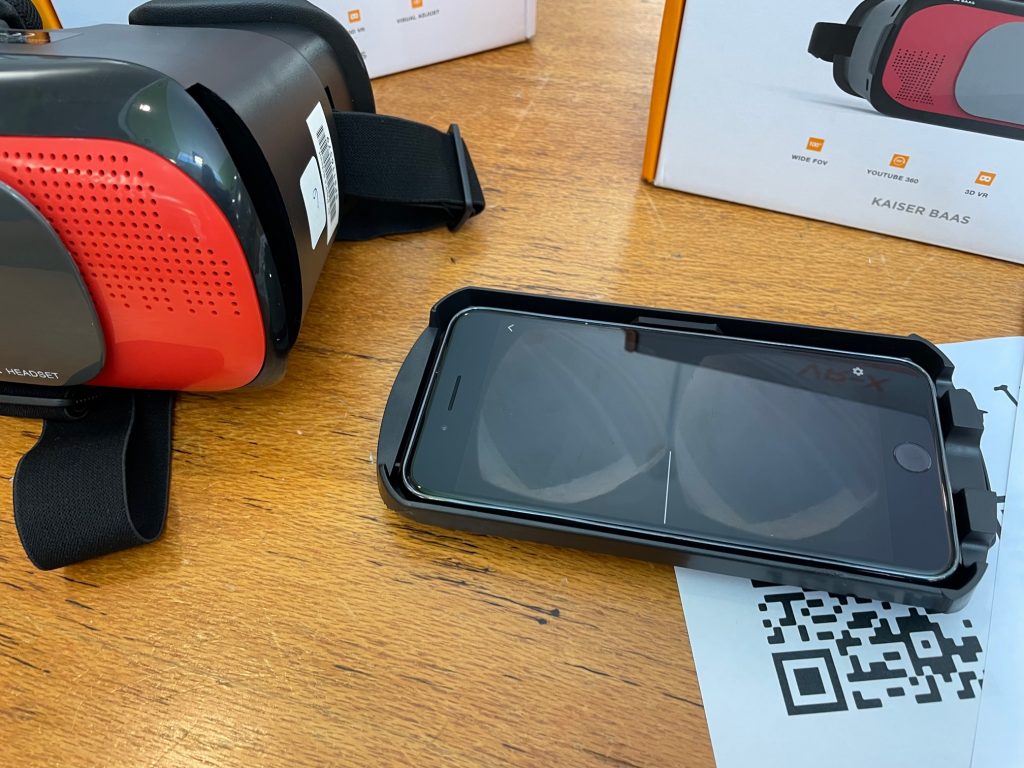 I’ve used the VR in a range of ways for lots of different subjects. Here are just a few.

As a welcome session to the library I often get out the VR. It’s a fun and easy way to get the students excited. I usually select videos that connect with reading or are just a bit of fun. The plan is to create a 360 video of our new library space and have the students explore the library in VR.

Now, when I am creating my research guides I try to find some 360 or VR videos to include. I did this for my Year 8 history research guide and the classes were able to come down to the Library, use the texts we’d set out and experience what a viking village would feel like in VR. 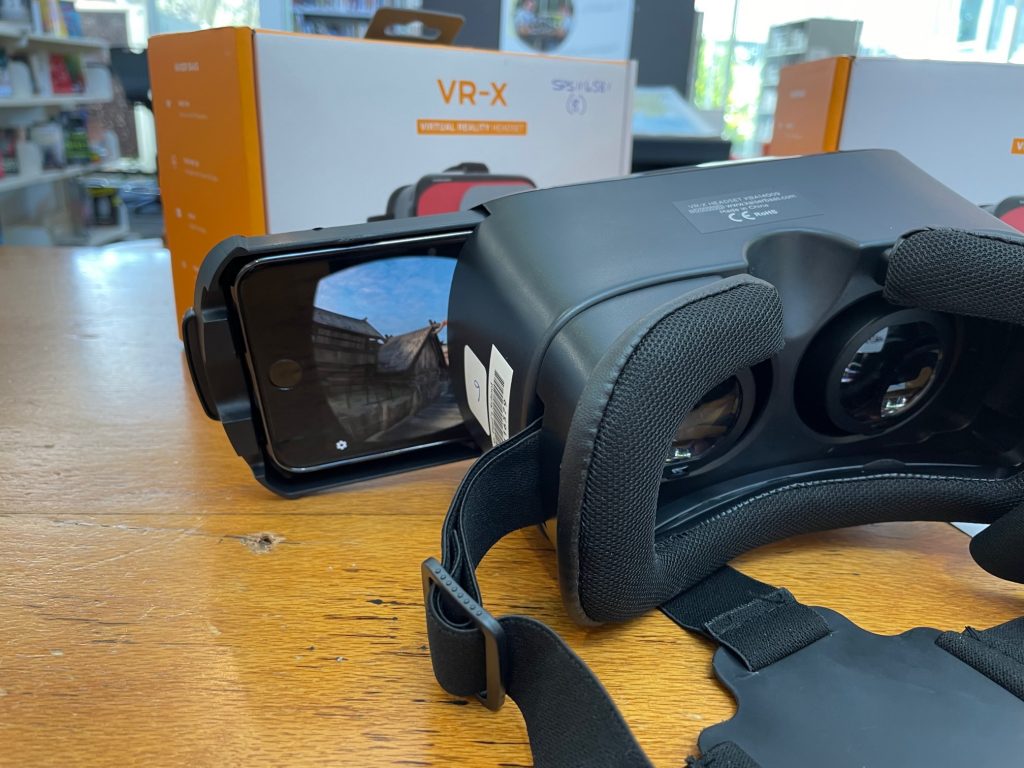 It’s also easy for students to create their own 360 video with a 360 camera or a 3D world. I use CoSpaces (a free plan will enable you to get one class creating). Once their 3D design is done, access CoSpaces, click on the VR headset option, insert into the headset and explore.

It’s pretty easy to get started with this level of VR. If you can operate a phone you can make this work.

When students are wearing the headsets, I have them work in pairs. One in the headset, the other as the guide to make sure they don’t walk into anything. Another reason I love the rollercoaster videos is that you make students sit down. No walking around and crashing into anything.

Start to gather your favourite videos, bookmark them or add them to your research guides so you can come back to them.

Have you used virtual reality in your school library? I’d love to hear how you do it or your favourite ways to use it.