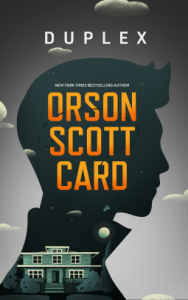 Duplex is the companion novel to Lost and Found. It continues in the same vein – a mix of realistic fiction with a mystery twist. Again, the characters have micropowers – like superpowers but too small, insignificant or useless to be deemed super. They are pretty unique and cool, though.

Duplex is a book that takes a while to read. I enjoyed sinking into its slow pace. That’s not to say nothing happens in the story – it does, everything from guys attacking with guns to fake FBI attempted kidnappings. There’s just a lot of space for inner dialogue and time between events. Time for introspection and relationship building. There’s also just time for great writing and descriptions, a feature of Card’s work.

Life changes for Ryan when he finds his dad has moved out and is dividing their family home into a duplex. Soon, Ryan is sleeping on the couch (he doesn’t have a bedroom anymore) and the rooms on the other side of the new walls and staircase house the Horvat family. Ryan meets Bizzy Horvat at school. She can meet his sarcastic wit and quick jibes like no one he’s ever met. When Ryan reacts so quickly and without thought to a bee in Bizzy’s hair (much like he reacted to a bee that stung his sister), he is approached by a guy who claims to discover people who have micropowers. Ryan’s quick reflexes are apparently a micropower and it turns out that Bizzy and her mother also have micropowers and there are a group of people who will stop at nothing to kill the Horvat family. So, Ryan’s quick responses might just come in handy.

I adored Lost and Found – the first of Card’s micropower novels and highly enjoyed Duplex. While the characters have powers, they sit just outside the realms of possibility, so the books in no way read like fantasy or paranormal novels. The books are a mix of relationships – both romantic and familial – and mystery.

The voice of the characters and the way they speak is highly unrealistic, but it’s also highly enjoyable. Maybe because you’d never find such eloquent language and turns of phrase in your average high school – certainly not in my school – is why this book was so much fun to read. There were a couple lines I thought might be a bit insensitive around Ryan’s reaction to being thought gay – wasn’t sure where his reaction was coming from. And I’m not many teen guys are super focused on their life goal to be married and have kids. However, Ryan’s journey from intelligent, sarcastic teen to responsible and caring young adult was insightful. His conversations with his dad are those every young man needs to have. And I loved how Ryan eventually stood up to his friend, called him out on his bullying behaviour and demanded change.

A strange book, but one I certainly enjoyed. I hope there are further novels in the micropower world.