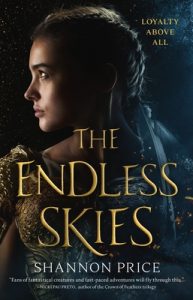 If you are looking for a unique fantasy novel, then check out The Endless Skies by Shannon Price. The Endless Skies invites readers into a world where shapeshifting warriors who live on a city that floats in the sky and a community of shapeshifting magical beings protect themselves from the humans who seek to destroy all they know.

You might assume Endless Skies is all about Rowan from the book’s synopsis, but Endless Skies is actually written from three characters’ perspectives. Rowan is a narrator and she is joined by her sister and her best friend. Rowan is a warrior-elect. She has completed years of rigorous training and is about to be sworn in by the king to become an official warrior. Shirene is Rowan’s older sister. She is a sentinel and has just been named as the King’s Hand – a prestigious position of respect and authority. Rowan’s friend Callen is a warrior. He has long hidden his true feelings about Rowan from her, but now he fears it might be too late. On the eve of Rowan’s warrior oath-taking ceremony, the warriors learn of a deadly disease that is targeting the children of Heliana. Teams of warriors are called and sent down to the human world to look for a cure before the prince falls ill, which could be the literal downfall of Heliana. Left behind by her friend and sister, Rowan learns there is far more at stake than what the citizens are being told about the disease and the long-held feud between the Leonodai and humans.

There is a very unique world in The Endless Skies and yet with so much action and so much going on in the book, I feel like I only saw snippets. There are four magical shapeshifting communities, the Leonodai being our main focus in this book. There was also a fifth, but they were wiped out by humans. Rowan is a Leonodai and can change from female human form to a winged lioness. Cool magic enables her weapons and armour to change with her. Her community values loyalty over all and Rowan, Shirene and Callen have committed themselves to serving their city and their king. Their city, Heliana floats above the ocean, protected from the human’s reach and they in turn protect the other shapeshifting communities. While the Leonodai fight with blades, arrows and axes, the humans fight with guns, bullets and late, planes and battleships, which gives a unique mix of modern (or at least the 20th century, the human world has a very WW1 timeline feeling to it) and ancient warfare and a great mix between reality and magic, that we don’t often see in fantasy novels.

Along with the quest into the human world for the cure to the illness, there is a love triangle element to the book. Rowan is currently dating a warrior called Ox. They are just beginning the courtship and it’s a bit of a secret. When Callen learns of their relationship, he decides it is time to be honest with Rowan about his feelings for her. This greatly confuses Rowan, as she once had feelings for Callen but thought he didn’t like her as more than a friend. Then, Callen, Ox and their warrior team are sent to look for the cure, and Rowan is left behind. When she does some sleuthing, she discovers their is more to the story than the sentinels have been sharing. This brings in themes of loyalty above all, truth, and the power of those who old the traditional and knowledge of a community. Rowan must decide if she will remain loyal in the ways she has been taught or if the knowledge she now holds should be shared to help save those she loves.

My one big negative in this book was the treatment of animals. There is a Roman Gladiator style battle against animals and there are plenty of details about how the animals are fought, injured and killed. While I know this is set up to show just how bad the “bad guys” are (who are human and so this is very human like, as history sadly shows us) and to demonstrate how brave, strong and yet nice the good characters are, it was a bit too much for me. I didn’t need all those details and found that I needed to skip those parts as the harm to the animals was described in detail.

The Endless Skies is a unique fantasy novel and once that could easily be read as a standalone novel.