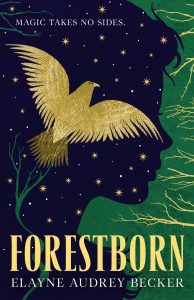 I don’t read fantasy novels all that often, but when I do I usually adore them. Forestborn was no different. It is an incredible quest novel. Our three main characters must travel together through perilous terrain, facing the things that haunt them and the pain from their past to find the rarest of magical powers to save the people they love. There is royalty, magic, very cool unique magical creatures, haters-to-lovers romance and a fantastic twist that I just didn’t see coming.

The magic in this book is unique, which I liked, as were the many magical creatures that pop up throughout the story. Rora is a shifter. As is her brother. Over time, Rora has shifted into her three different animal forms, mouse, hawk and lynx. Her brother has yet to shift into his third form. After their parents were killed along with all the other shifters in their village, the two siblings survived on their own in the magical forest, before finally finding refuge in Teylan. Now, Rora works for the king, but she and her brother have never really been accepted by the humans that surround them. When a magical plague that is killing humans gets worse and Rora’s best friend Prince Findley falls ill, Rora, her brother and the elder Prince Weslyn journey into the magical forest to find stardust in the hope it will cure the disease.

What begins as a simple but dangerous quest morphs into a much bigger plot, with a nice twist. War looms and there are biggest politics and more at stake than we readers and the characters realise at the start of the book.

I really enjoyed the romance. While there is little time on their journey for much aside for survival, it does allow Rora to see and learn about another side to the usually standoffish Weslyn. She finally discovers there is more to how he acts and that he doesn’t hate her or her kind, as she once thought. They have to work together to survive. There isn’t a lot that goes their way and we readers are going to have to wait for the sequel to see if their relationship that has only just started can withstand so much loss, grief and distance. There is also the promise of a second romance, should Helos and Finley reunite and work out their differences.

Forestborn is well written and genuinely easy to read. It was lovely to return to the magical world that felt a little nostalgic (kind of like Narnia in Prince Caspian) but also entirely unique. I can’t wait for the second book.