Book Review: A Dragonbird in the Fern 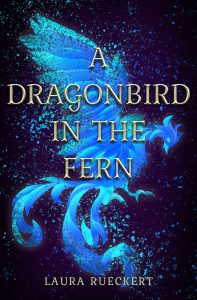 When an assassin kills Princess Jiara’s older sister Scilla, her vengeful ghost is doomed to walk their city of glittering canals, tormenting loved ones until the murderer is brought to justice. While the entire kingdom mourns, Scilla’s betrothed arrives and requests that seventeen-year-old Jiara take her sister’s place as his bride to confirm the alliance between their countries.

Marrying the young king intended for her sister and traveling to his distant home is distressing enough, but with dyslexia and years of scholarly struggles, Jiara abandoned any hope of learning other languages long ago. She’s terrified of life in a foreign land where she’ll be unable to communicate.

Then Jiara discovers evidence that her sister’s assassin comes from the king’s own country. If she marries the king, Jiara can hunt the murderer and release her family from Scilla’s ghost, whose thirst for blood mounts every day. To save her family, Jiara must find her sister’s killer . . . before he murders her too.

I really enjoyed this fantasy novel that features political scheming, vengeful ghosts and emphasises the importance of how we communicate. It’s a unique fantasy novel and I liked how refreshing it was. No epic fantasy battles, but plenty of tantalising romance, politics, betrayal, and a touch of magic.

Princess Jiara’s life is utterly changed when her older sister is murdered. Jiara knows they have just months to find her sister’s killer before her sister, left to wander the earth, becomes increasingly violent. In the midst of this her sister’s intended arrives. Raffar, King of Farnskag, makes a proposition – he will marry Jiara instead and seal their countries’ alliance. The Queen and Jiara agree and Jiara is thrust into a new world. She travels with Raffar to Farnskag, but she must rely on a translator as neither she nor her new husband speak the other’s language.

As Jiara travels to Farnskag we learn a little more about her, her relationship with her sister and what she had planned for her future. When her friend and one of her translators has to leave the party, we learn Jiara is a caring person. We also learn how much she struggles with reading and learning. While they never use the word, Jiara has the signs of being dyslexic. It weighs heavily on her mind, especially when she arrives in Farnskag and begins learning their language. Unable to communicate with her new husband, Jiara relies on her translator for everything.

Despite the language barrier, Jiara and Raffar make a good match. I loved that we are given a bit of insight into their history and why they might be drawn to each other, regardless of cultural differences. I so enjoyed watching them grow closer and learn other ways to communicate. They develop a sense of trust and comfort. There is also a heightened sexual tension between them as they wait to consummate their marriage.

The political rumblings build throughout the story. I saw the betrayal coming but the intrigue of how the plot all fit together was interesting even if it was guessable. I loved, loved, loved that this betrayal didn’t rock the trust between Jiara and Raffar.

Alongside the political intrigue was the threads of magic that run through the story thanks to the gods and beings the characters worship. There is of course the ghost aspect and Jiara’s sister haunts her as she tries to find her murderer. This adds a layer of drama and suspense to the story.

A Dragonbird in the Fern is a beautifully written fantasy novel with important character representation, including invisible learning difficulties, the power of language, and intrigue, mystery and a sweet story of trust and romance.

Advisory: Sexual references. References to sexual relationships, waiting to consummate a marriage and sex between characters in a fade to black scene with minimal details. No coarse language. Violence – murder, injuries, fighting, injury by an animal and to an animal.

Representation: Main character has dyslexia or similar learning and reading difficulty. LGBT side characters. Main and side characters described as white, brown and light brown.