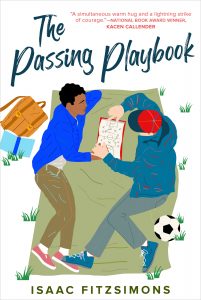 Fifteen-year-old Spencer Harris is a proud nerd, an awesome big brother and a Messi-in-training. He’s also transgender. After transitioning at his old school leads to a year of bullying, Spencer gets a fresh start at Oakley, the most liberal private school in Ohio.

At Oakley, Spencer seems to have it all: more accepting classmates, a decent shot at a starting position on the boy’s soccer team, great new friends, and maybe even something more than friendship with one of his teammates. The problem is, no one at Oakley knows Spencer is trans – he’s passing.

So when a discriminatory law forces Spencer’s coach to bench him after he discovers the ‘F’ on Spencer’s birth certificate, Spencer has to make a choice: cheer his team on from the sidelines or publicly fight for his right to play, even if it means coming out to everyone – including the guy he’s falling for.

A story about sport, friendship, romance and becoming comfortable with sharing who you are. The Passing Playbook is a trans coming out story but also about belonging and accepting yourself

Spencer is starting at a new school. It’s a fresh start and one he wants to control. He decides to keep secret the fact that he is trans. When he is recruited for the boy’s soccer team, Spencer knows he walks a fine line between passing and being revealed as trans. When the league’s discriminatory policy benches Spencer he has to decide how much he trusts his team mates and how much he is willing to risk to fight the decision.

Sports stories offer such a great backdrop for relationship and character development. It seems to bring out the best and worst in people. As Spencer starts to settle into his new school and tries out for the soccer team he has to decide how much he will risk to protect his new friendships and place on the team. He loves soccer, always has, so he relishes the chance to play on the boys team – something he has always wanted to do.

While Spencer’s school is meant to be pretty liberal and progressive, he is still uncertain how, if or when he wants to come out as trans to his classmates. As he starts to get to know Justice and develops a friendship (and something) with him, he starts to learn more about the risks Justice faces if he were to ever reveal his own true identity.

Spencer has loving and supportive parents and they represent such a positive support team for Spencer. Yet, they still truly struggle to relate to Spencer and he is sometimes frustrated with their responses. As he gets to know Justice and Justice’s family, Spencer starts to realise how lucky he has been to have supportive parents. He also becomes better at communicating his feelings to his parents and is able to accept their support, even if it’s a little different from what he expects.

Spencer’s fight to play soccer throws into light the discriminatory practices of the state and sport league. He also evaluates what he thinks his classmates will think about him should he come out, as well as learning to accept and use his voice to stand up for things he thinks are important. He struggles with new friendships and speaking out against things that trouble him. There’s re some very offensive homophobia and transphobia displayed by peripheral characters. Happily, the support displayed by other characters makes this a positive and uplifting novel.