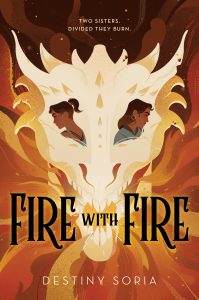 I loved that Fire With Fire could work as a standalone fantasy novel (love, love, love it when I don’t have to read a whole series to get a complete story), but there is also room for this story to be continued in a different way, should the author so choose.

Perfect for fantasy readers who want a little something different than the traditional fantasy world setting or for paranormal or realistic readers wanting to adventure into the very cool world of dragons and magic.