Book Review: When We Are Invisible 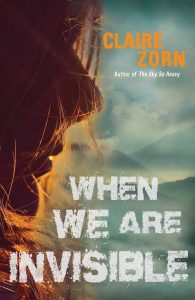 In the midst of a nuclear winter, Lucy, Fin and Max flee the chaos of Sydney with blood on their clothes, a gun and handwritten directions to safety. When they reach Wattlewood, it seems like their struggle to survive might be over. There is food, warmth and adults in charge. So why can’t Lucy shake the feeling they’re still in danger?

Lucy’s survived the apocalypse, but can she escape a more insidious threat?

When We Are Invisible is the sequel to The Sky So Heavy. Published eight years after the first book, some might say this is a very long awaited sequel. It doesn’t disappoint.

Readers are reunited with Lucy, Max and Fin. When We Are Invisible picks up where The Sky So Heavy left off. Lucy, Fin and Max are running for their lives. Fleeing the bloodshed and horror of Sydney, they head for the hope of safety and food at the Wattlewood commune. Finally surrounded by enough food and water, safety, blessed warmth and adults who are taking a stand to protect them, things at Wattlewood are good. But Lucy isn’t sure everything is as safe as it appears.

While When We Are Invisible is a continuation of The Sky So Heavy’s story, it is its own book. The first book was written from Fin’s perspective, while in the sequel, Lucy takes over the narration. It is amazing to see the world through her eyes. We learn more about her family and the life she left behind, as well as the events that haunt her and the things are troubling her now. It creates a different perspective and a different focus for the story.

It is interesting reading When We Are Invisible, about a global event that effects the entire world and the supply of resources and how people react, while living though a global pandemic. It makes me want to create an inventory of my pantry and perhaps befriend a prepper. Reading When We Are Invisible again reinforces how accurate Zorn’s interpretation of how people react to such events was in the first book (though maybe she understated the importance of toilet paper. It does get a specific mention in this second book). It is a confronting look at survival and the lengths people are willing go to, to survive. This second book looks beyond the initial struggle for resources to the placement of power and what safety means, as well as highlighting important issues around abuse and power imbalances in relationships that are prevalent regardless of society’s level of pending doom.

Lucy is a female character and the events of their arrival and stay at Wattlewood feature her female perspective. It brings to light the differences in how those from different genders are treated, the power differences asserted by some characters and the fight at all times to stay safe. There is an incredibly powerful passage in the book that I know all women and girls will relate to.

This shift in focus and perspective made this novel so powerful. It is both a continuation of the overall story but an important book in it’s own right. No second novel syndrome here. However, to make sense of the story, it’s recommended that readers read the books in series order. Will there be a third book? I would welcome a third book and the continuation of this compelling story, but the ending does feel a little more concluded than the events of the first, so it could go either way.

Dystopian fiction fans and those who enjoyed the first book will not be disappointed by this expertly crafted story.

Reading Age Guide: Ages 13 and up

Advisory: Frequent violence, death, injury by guns and starvation. Fighting. Injury and death to animals for food, skinning and preparing of animals for eating. Coarse language.