Book Review: You Were Never Here 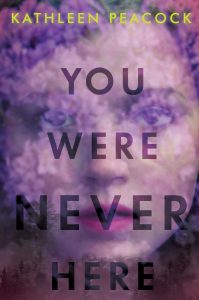 Cat hasn’t been to Montgomery Falls, the town her family founded, since she was twelve years old. Since the summer she discovered she could do things that no normal twelve-year-old could do. Since she had her first kiss with Riley Fraser. Since she destroyed their friendship.

Now, five years later, she’s back and Riley has disappeared.

For the last three months no one has heard from or seen Riley. And while there are all sorts of conspiracy theories about where he went, neither the police nor his parents are any closer to finding him. When Noah, Riley’s brother, asks for help in discovering what happened, Cat is torn between wanting to learn the truth and protecting the secret that she’s been guarding ever since that summer she and Riley stopped speaking.

But then a girl is discovered floating in the river, barely alive with no knowledge of who attacked her or why. With the possibility that someone out there is hunting teens, Cat must make a choice: Use her unusual ability to discover the truth and find Riley or keep running away from a power she can’t control. Only one choice will put her in a killer’s sights…

Let’s hear it for books about murder and mystery and teenage investigators and slightly paranormal skills. You Were Never Here is an atmospheric mystery that hooked me right from the start. Fans of The Body Finder (and wow, do I have a lot of those fans in my library) are just going to adore You Were Never Here.

Cat hasn’t been to Montgomery Falls since she was twelve. Now her father is sending her there to stay with her aunt. Cat is dreading the summer, but it becomes a lot worse when she learns that her ex-best friend Riley has been missing for three months. Written off as a runaway, the police and town have no leads. Riley’s brother asks Cat to help discover what really happened, and after Cat and her new friends discover a girl floating half dead in the river, Cat agrees. But there is something most people don’t know about Cat – she can discover a person’s worse secrets just by touching them.

This book has so many things going for it. Alongside the mystery of the missing or hurt teenagers, the reader is also given the mystery of what happened last term at school that caused Cat to be so secretive about it and for her father to send her to Montgomery Falls, completely cut off from the world. There is also, of course, Cat’s unusual ability. How she got this ability is never explained, aside from the women in her family having special gifts for generations. Her father refuses her to talk or acknowledge it and while her aunt has her own gift, she too has been forbidden to speak of it. That’s okay, though, as the focus is not on the how or why of Cat’s gift, but rather  far more on her acceptance of it and how she might use it to help find Riley. And really, she uses her intellect and sleuthing to find the clues more than her ability.

The romance – gah the romance. I needed at least three more chapters to explore that ending!!! And that’s all I am saying on the matter.

I really enjoyed Cat as a protagonist. She is fat (her word) and while she wants to be confident in that and embrace her body and wants the people around her to accept and love her for who she is, she struggles with doubt and other people’s opinions. Cat is not scared to walk into scary situations, but she doesn’t do it blindly. She is smart and that always makes for fun reading.

The whole mystery is very cleverly done and I really enjoyed how it all unfolded. I had my suspicions about the culprit and there was a very nicely laid clue which at first I dismissed but later came back to, and it all came together in a surprising but believable way (even though it is rather nasty).

The mystery is concluded in this books and the story finished, but I really hope we return to Cat and her friends in another book.