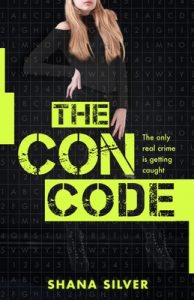 By day, seventeen-year-old Fiona Spangler runs small cons for her ritzy prep-school classmates: getting them out of tests and forging fake hall passes. But by night, Fiona joins her dad on riskier heists: stealing back the clue-filled forgeries her mom scattered across the country before she disappeared. Fiona desperately hopes that her mother will be waiting at the end of the scavenger hunt she left behind.

And they are SO close. Just three more heists remain, but then disaster strikes when Fiona’s dad is captured by the FBI. Desperate to finish the job and save what’s left of her family, Fiona assembles of crew of teen criminals: a master of disguise who can transform into anyone, a talented hacker who only communicates in glares, and a rival con artist with a vendetta against—and possible crush on—Fiona.

The Con Code brings together mystery and action in a fast-paced race to find and solve the clues while trying to outrun the FBI. How do you do that? Recruit your enemy of course and try not to fall for him. The Con Code will be great for YA mystery fans looking for a light read with lots of disguises, romance and heist hijinks.

Fiona Spangler knows how to run a con. Her parents trained her well. Now she and her father are trying to track down and steal forgeries her mother left scattered around the country before her disappearance. If Fiona and her dad can piece together the clues, they have a chance to find her mother before the FBI. But when the FBI Director’s son joins Fiona’s high school and her father is arrested, Fiona has no choice but to finish the mission herself – recruiting both her friends and her number one enemy.

Double crosses and betrayals join forces with ultimate disguises and a range of fun locations for the heists, including amusement parks. The are of course lots of twist and turns in this book, and the ending was a surprise. This has a juvenile tone that younger teens will enjoy, along with a summer romance road trip feel.

The Con Code is a light, humorous read. Prepare yourself to suspend disbelief a little as you follow along with the characters. Romance (will they, won’t they, can they trust each other?) takes the focus of a lot of the book as the characters try to outwit the FBI.

I don’t agree with the comparisons to Ally Carter’s Heist Society. While it does have a similar set up and uses the same array of heist tricks and action, The Con Code doesn’t quite meet the sophistication of Heist Society (but I’m a huge HS fan, so maybe I am biased). This is mainly because the characters seem a little over the top and stereotypical in their respective roles. The reader is also aware of the characters’ back-up plans so the way they outsmart the police isn’t a surprise, as it is in Heist Society and movies such as Ocean’s 11.