Book Review: A Whale of the Wild 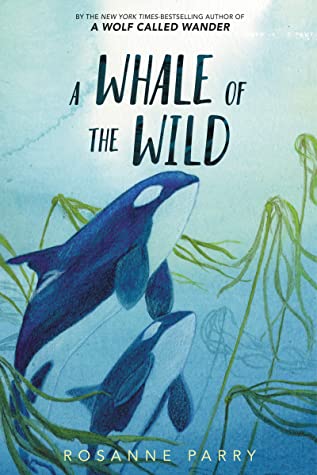 For Vega and her family, salmon is life. And Vega is learning to be a salmon finder, preparing for the day when she will be her family’s matriarch. But then she and her brother Deneb are separated from their pod when a devastating earthquake and tsunami render the seascape unrecognizable. Vega must use every skill she has to lead her brother back to their family. The young orcas face a shark attack, hunger, the deep ocean, and polluted waters on their journey. Will Vega become the leader she’s destined to be?

Vega is an orca, descendent of the wayfinding grandmother orca of her family. Vega knows that someday it will be her job to lead her family, to find food and follow the patterns and stories that have guided her family for many generations. But she doubts her right to lead, especially when decisions she makes puts her family or danger, or no matter how far they hunt, food is scarce. When she and her brother Deneb are separated from their family, Vega must do everything to protect him and find their way back to their family.

I give full credit to Rosanne Parry. She has done a fantastic job of not only researching orcas, but capturing their heart and soul. While we mere humans will never know the wonders of the orca mind and heart, I think, from what we know of orcas, Parry has expressed their love of family, their matriarchal society, the hurt, pain and grief from loss of family and food sources, their sense of fun and adventure and their amazing intelligence, especially emotional intelligence.

The book is narrated in turn by both Vega and Deneb. Each bring a different perspective to the story. Vega is the female who knows she is born to lead. She struggles with doubting her own abilities, but that belief in her place never really wavers. As the author notes, orca family environments where females are respected, followed and protected at all costs, is a much different society from the one in which young female humans grow-up. Deneb is the younger brother. He is coached by the older male orcas about his place. He will never lead, but he will support Vega and be by her side in all things. His joy is in supporting and swimming alongside Vega. Vega has a more mature voice, while Deneb is the younger brother voice in all things – decisions, food and play.

There is reference to all of the greatest threats to orcas in the book – past and present. Vega and Deneb reflect on the grief of the older orcas who remember a time when young orcas were captured and never returned. There is a heartbreaking scene where Vega remembers their losses through the lens of her own more recent loss. The orcas reflect on great fights where they were targeted and fought back for their freedom, costing many their lives and others their family members. There is also the current threat of a lack of food. This is present throughout the entire novel, as Vega, Deneb and their family search for food. Toxins in the water are also mentioned and has a costly effect on Vega’s family. Boat noise which influences an ocas’s ability to communicate, “see” and hunt for food. Throughout all, the orca stories and way is shared, including never to hurt humans, how they have worked with humans and the respect shared between orcas and the Indigenous peoples. I loved Vega and Deneb’s view of humans. Some of the language used is human terms and yet other words – grabbers for hands, etc, reflect the orca view.

I was amazed by how Parry brings the world of the Salish Sea orcas to life. In such a small and adventurous book, she brings to life the way of the orcas, their history with the indigenous people of the land, their relationship with other orca pods, and their knowledge of the sea. Mention of other orca species is included and Deneb has a wonderful adventure with a solitary male orca who hunts small mammals. They marvel at their differences and their similarities.

There is so, so much to unpack and explore in this book. I would love to use this as a class novel or a jumping off point for an inquiry unit or marine environment studies. It is also a thoroughly enjoyable adventure story of danger and daring and family.

The impact of humans on orcas is clear in the story without feeling sanctimonious. I hope it inspires many young readers to learn more about orcas and what we humans can do to help keep them safe. The author includes notes, references, research and further reading and information about the inspiration for her characters.

Honestly, the writing and storytelling in A Whale of the Wild is flawless. My advanced copy didn’t include the illustrations, so I look forward to seeing how they help bring the story to life when I get my hands on a published hardcopy. A beautiful story that does justice to a beautiful subject. Also – the ending was a surprise. I’ll be interested to hear what my students say about it.

Reading age guide: Ages 8 and up.