Book Review: Seasons of the Storm 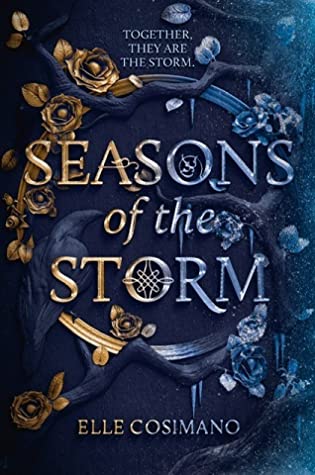 One cold, crisp night, Jack Sommers was faced with a choice—live forever according to the ancient, magical rules of Gaia, or die.

Jack chose to live, and in exchange, he became a Winter—an immortal physical embodiment of the season on Earth. Every year, he must hunt the Season who comes before him. Summer kills Spring. Autumn kills Summer. Winter kills Autumn. And Spring kills Winter.

Jack and Fleur, a Winter and a Spring, fall for each other against all odds. To be together, they’ll have to escape the cycle that’s been forcing them apart. But their creator won’t let them go without a fight.

Seasons of the Storm is the first book in a new fantasy duology. It’s kind of like Hunger Games meets the folklore of Jack Frost. Fighting, hunting, rebellions, breakouts, romance, teamwork and magical powers connected to nature and the weather combine to make an epic fantasy.

Jack is the embodiment of winter, just one of hundreds of seasons who have been saved from death and given a second life. There are strict rules a season must follow and the only interaction one season has with other seasons is to hunt and kill the season that comes before them and be hunted and be killed by the season that comes after them. But Jack is falling for Fleur, the spring whose job it is to kill him each year, and her reciprocated feelings are causing her to plummet on the rankings board and risk termination. For a chance to be together, Jack and Fleur have to decide if it is worth risking everything to challenge the system, break the cycle and try and find another way to survive.

This book is set on Earth in a very real and recognisable world. The only difference is that seasons, embodiments of the four seasons, walk among us and control the passing and changing of the seasons with their magic. What the seasons do during their season isn’t really explored all that much. The focus is on the times of change over, when Spring comes to kill Winter, and the time spend in stasis and recharging to go back out into the world again. We also have Chronos and Gaia as Father Time and Mother Earth who are father and daughter. Together with Chronos’ guard, they control the seasons, turning the days spent above ground into a sort of game, with rankings, a score board and a system where those who fall below the red line are culled.

Aside from a short prologue that outlines Jack’s initial death and transformation into a season, the book plunges readers into the middle of Jack and Fleur’s growing connection and situation. Jack fears death, Fleur is compassionate. Gradually, over a time we readers do not get to see, the hunt between them goes on longer, damaging Fleur’s stats, while taking Jack to the top of the leaderboard. But Jack hates the cycle of hunting, killing and segregation. All seasons have a handler, a “person in the chair” if you will, someone who tracks them, sees everything through video footage, helps them plan each hunt and monitors them remotely. When Jack starts to conceive of the plan to escape Chronos’ rules and control, he must also get his handler to agree. Jack also has to recruit a cycle of seasons, including Fleur as well as a summer and an autumn and their handlers.

I found Seasons of the Storm a bit confusing at the start. The action and story start straight away and we readers must catch up to understand how the system works and what is at stake. It makes for exciting reading and once I had my head around the details, I found I was completely engaged in the story, the characters and the action. What starts as a simple breakout turns into a full-on rebellion. The story is slightly reminisced of the Hunger Games and readers who don’t usually enjoy fantasy and prefer action or dystopian fiction are likely to enjoy this book. There is some cool control of the elements and some epic fight scenes.

While this is the first book in a planned duology, I’m not sure how a second book will fit in the story. The story is fairly complete and some readers may be happy to leave Jack and Fleur with the ending they achieve. There is just one thread left open, and it will be interesting to see if or how the author plans to explore this in book 2.

Seasons of the Storm is an exiting fantasy novel that is as unique as it is exciting.