Book Review: Love From A to Z 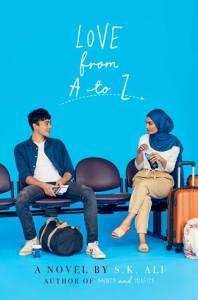 A marvel: something you find amazing. Even ordinary-amazing. Like potatoes—because they make French fries happen. Like the perfect fries Adam and his mom used to make together.

An oddity: whatever gives you pause. Like the fact that there are hateful people in the world. Like Zayneb’s teacher, who won’t stop reminding the class how “bad” Muslims are.

But Zayneb, the only Muslim in class, isn’t bad. She’s angry.

When she gets suspended for confronting her teacher, and he begins investigating her activist friends, Zayneb heads to her aunt’s house in Doha, Qatar, for an early start to spring break.

Fueled by the guilt of getting her friends in trouble, she resolves to try out a newer, “nicer” version of herself in a place where no one knows her.

Then her path crosses with Adam’s.

Since he got diagnosed with multiple sclerosis in November, Adam’s stopped going to classes, intent, instead, on perfecting the making of things. Intent on keeping the memory of his mom alive for his little sister.

Adam’s also intent on keeping his diagnosis a secret from his grieving father.

Alone, Adam and Zayneb are playing roles for others, keeping their real thoughts locked away in their journals.

Until a marvel and an oddity occurs…

Love From A to Z is a fun, romantic love story that encompasses a deeper message about justice, equality, faith, health, family and living the life you were meant to live, fully embracing the person you were meant to be.

Two teens. Destined to meet? Or maybe not. It’s a marvel that Adam and Zayneb meet, a marvel that they meet again. Zayneb is spending two weeks in Doha, Qatar after being suspended from school after speaking out against a racially discriminative teacher. Adam is returning to Doha after his first year of tertiary education overseas. His father doesn’t know Adam has dropped out of college, nor about the MS diagnosis that makes Adam want to soak in memories of his mother, who died when he was just a boy, make things and really live life. Adam and Zayneb meeting seems right, but they will have to work hard to discover if a future between them could work.

Things I loved about this story:
The first lines, “This is a love story. You’ve been warned.”
The introduction and notes to readers from the narrator that start the story.
The writing style that is different and refreshing and awesome. The chapters are split between Zayneb and Adam’s perspectives, written as if taken from their journals and yet still immersing the reader in action and dialogue.
Faith. I love faith in books and Adam and Zayneb’s Muslim faith emanates from every part of this story. It is a solid part of their lives and decisions and that is consistently reflected in every part of this story.
Adam’s peace, desire to make things and be there for his family. He was such a refreshing character, so easy to spend time with and enjoy. It was heartbreaking to see him go through the ups and downs of his diagnosis and early onset of symptoms. Yet he never gives up, complains or whines. He is admirable and loveable in every way.

I was hooked by the promise of The Sun is Also A Star meets Anna and the French Kiss, which I loved, and Love From A to Z lives up to that promise. Love From A to Z reads like a long book. While this means that the instant attraction between Adam and Zayneb in no way becomes insta love because there are too many stops and starts, bumps, time for introspection, fights and twists for it to develop anything other than slowly, the story did get a little long winded in the middle.

Zayneb is a strong and formidable character. She is determined to stand up for what’s right. And while sometimes that means she puts people off side or she has to face the consequences of speaking up, she’s not afraid to take that all on. Her determination is admirable. The messages of justice, anti-discrimination and fighting against prejudice and ill-informed opinions is one I’m sure many readers will relate to, no matter what their faith, beliefs or stance in life. If there’s something we humans seem to excel at, it’s judging others. At time, Zayneb’s anger and zest for justice seemed to border on revenge – let’s just say it would be exhausting hanging with her – but that’s something she is aware of and something she wants to temper. I really enjoyed Adam’s journey through accepting and sharing with his family and friends his medical diagnosis. His quest for life and his desire to share that with his family was really heartwarming.

Love From A to Z certainly has lots of messages about fighting against prejudice and standing up for your rights. It is a unique story about justice, family and love.