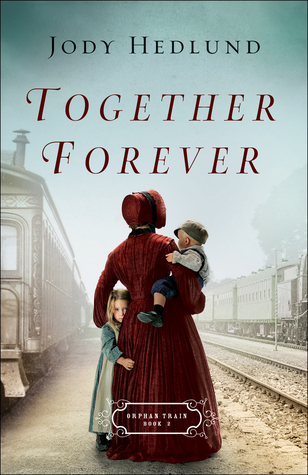 Determined to find her lost younger sister, Marianne Neumann takes a job as a placing agent with the Children’s Aid Society in 1858 New York. She not only hopes to offer children a better life, but prays she’ll be able to discover whether Sophie ended up leaving the city on an orphan train so they can finally be reunited.

Andrew Brady, her fellow agent on her first placing-out trip, is a former schoolteacher who has an easy way with children, firm but tender and friendly. Underneath his charm and handsome looks, though, seems to linger a grief that won’t go away–and a secret from his past that he keeps hidden.

As the two team up, placing orphans in the small railroad towns of Illinois, they find themselves growing ever closer . . . until a shocking tragedy threatens to upend all their work and change one of their lives forever.

Together Forever is the second book in the Orphan Train series. It picks up where book one left off, but this time telling the story of the second-eldest Neumann sister, Marianne. Marianne grieves the loss of her younger sister, who ran away. Marianne blames herself and is determined to do everything she can to find Sophie. Marianne joins the Children’s Aid Society as a placing agent on the Orphan trains, hoping to use their records to find Sophie. On her first journey, Marianne is drawn to her fellow agent, outgoing and charming Drew Brady. But with a romance forbidden between agents and with each of them with a past that is holding them captive, any future between them seems unlikely.

I was fortunate to be able read all three books in the Orphan Train series all together (one benefit of waiting for an entire series to be published before starting book one). And I am so glad that I could, because as soon as I started the first book in the series I knew I wanted more of this charming family facing such difficulties. More of swoon-worthy romance. More challenges overcome through faith and community. As soon as I finished each book I eagerly picked up the next. While each of the three titles in the Orphan Train series could be read as a standalone, I believe that it is much better to read them as a series, better to understand the depth of each of the characters, their relationships and their journeys, separate at times and yet each interconnected.

Once again, I was totally content to be drawn into the world that Jody Hedlund has created in this series. The setting – from the desperation of New York to life on the trains and the little country towns – comes alive under the careful hand of the author. Marianne differs from her sister but is equally determined and strong. While she can only see her weaknesses and mistakes it is clear to see she is kind and big hearted. The attraction between Brady and Marianne is pretty instantaneous but they must both work through a number of obstacles, including themselves, before their relationship can develop further, preventing their romance from feeling rushed. And there is certainly no denying the attraction they share.

The story of a sister’s love, of overcoming mistakes and learning to fully embrace life, of young orphans finding a home is heartwarming. Yet, I liked that Hedlund doesn’t sugarcoat the true nature of the situations many orphans found themselves in during this time.

This truly is a beautiful and thoroughly enjoyable series and I highly recommend it to readers who like Christian historical romance.

Published: 1 May 2018 by Bethany House Publishers.