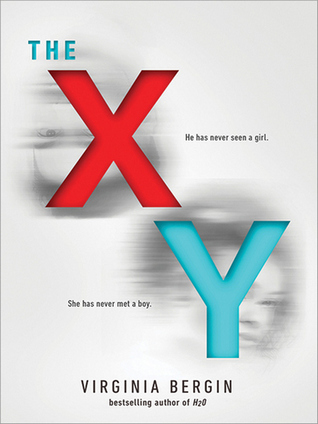 In River’s world, XYs are a relic of the past, along with things like war and violence. Thanks to the Global Agreements, River’s life is simple, safe, and peaceful…until she comes across a body in the road one day. A body that is definitely male, definitely still alive.

River isn’t prepared for this. There’s nothing in the Agreements about how to deal with an XY. Yet one lies before her, sick, suffering, and at her mercy.

River can kill him, or she can save him. Either way, nothing will ever be the same.

The XY is a compelling and unique work of speculative fiction that asks the question, what if? What if a drastic illness reduced the population by half. What would the world look like? How would things have changed 60 years on? What if the half that was left to start over were all female? What if a young girl, who has only know life in this new era, met a boy, a strange creature she recognises only from history lessons? How would she treat him, how would it change her world?

River lives in a world two generations on from an event that changed everything. When she finds an injured stranger on the road home, she is shocked to discover it is an XY – a boy. When she saves his life and takes him back to her community, it will forever change her life and how she views her world.

The XY instantly caught my attention with its intriguing summary. A world where men have disappeared, a world where gender norms are switched or challenged. It wasn’t until much later, after requesting a review copy, that I realised this book has already generated a fair amount of buzz and criticism, having already been published by a different publisher under a different name. I do not know if the text has been dramatically altered between the editions or not, but for clarity, my review is of the 2018 Sourcebooks Fire publication.

I was impressed with the writing style and the overall effect of the novel. It’s clever, thought-provoking and undoubtedly going to create a stir. When I mentioned this title to my high-school book club members, I was instantly met with delight from the girls and outrage from the boys. But I do not, personally, think this book is about man hate. Nor do I think it is trying to say that women are better than men. The cause of the reduced crime and complete restructuring of the world is not because it is run by women as such but more because of the massive event that led to women running the world. Image the death of half the population. If that happened today that would be a loss of 3.8 billion people. That would be a massive, hugely horrific and traumatic event, and that’s exactly how it is portrayed in The XY. Things changed not because men are bad, women are good and the death and segregation of the former led to the freedom of the later, but because things had to change and with change came the opportunity to start afresh. To enact new, fairer ways of governing. To create an international set of agreements that value life and truth. To protect the environment. Perhaps the world wouldn’t be a peaceful as it is in River’s world – but I’d like to think that men or women would try to make the world a better place. Perhaps, if removed from the world and segregated from women, men wouldn’t remain in an army-style, video-gaming, woman-hating lifestyle. Again, Bergin makes it clear that this is just one section of the male population, and that perhaps other sections were raised differently (then again, you just have to look to some of our leaders today and it becomes totally plausible). But for the purposes of the story, it provides the necessary what if question – What if women created a new world, a new way of living without fear and restrictions and what if men continued to live with the same overall mindsets of today’s world.

The trauma of the death of the male population is remembered by the grandmummas, but a boy is a new and very strange thing to River and others of her generation. I love River’s voice and the first person narration that allows the reader to be fully immersed in her world and thoughts. She very funny, and I loved her fire, indignation, confusion and compassion. There were so many times I laughed – out loud, snort-laughter – at something she or her great-grandmother Kate, said. She loathes Mason and the troubles he has brought to her world.

Aside from a dear relationship between River and her friend Plat, there is no romance in this story. There is also little action. Instead, introspection, humour and quiet reform are the strengths of this book. It doesn’t delve too deeply into the world outside River’s sphere, doesn’t explore all facets of the new society. Make what you will of the world Bergin has created. Maybe you would have written it differently, maybe you think a world without men or a sanctuary removed from any female input would be quite different, but it any case, I found The XY to be a thought-provoking and thoroughly enjoyable novel.