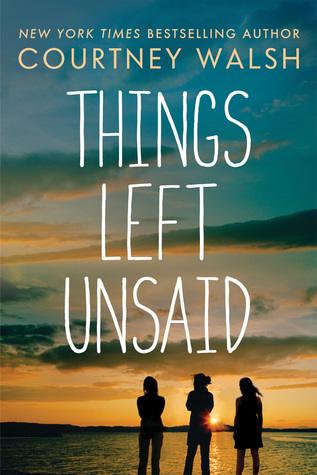 Lyndie St. James is thrilled that her best friend, Elle, is getting married but unprepared for the emotional storm of the wedding week and returning to her childhood summer home of Sweethaven. The idyllic cottage community harbors some of her best—and worst—memories. It’s not only the tragic death of her childhood friend Cassie that has haunted her for ten years, it’s the other secrets she’s buried that have kept her from moving on.

But Lyndie isn’t the only one with secrets.

Cassie’s mother, father and brother, still struggling with the loss, have been drifting further and further apart. And Elle herself, the last to see Cassie alive, carries an impossible burden of guilt. Now reunited, each of them has a choice: to reveal the truths of that night or continue to live in its shadow. That means embarking on a personal journey of the heart—to escape the darkness and all its regrets and to finally come to terms with the past and, especially, with each other.

Lyndie left Sweethaven after the death of her best friend Cassie and vowed to never return. But with her friend Elle’s wedding taking place in the town they once called their summer home and the ten-year anniversary of Cassie’s death coinciding on the same weekend, Lyndie has no choice but return to the place that took so much from her. Returning to Sweethaven also means coming face-to-face with Cassie’s brother Tucker, the man Lyndie has tried so hard to forget.

There are so many stories woven into this one book. There is Lyndie and her story of emotional withdrawal after the events ten years ago. There is Tucker, his grief for the death of his sister, the guilt he feels for everything that happened that night and his desperate attempts to continue living a new life, especially when faced with the ghosts of his past. Elle’s story is multilayered with her secrets and regrets of that night and of her childhood, with her relationship with her fiancé Travis, of the history they both shared with Cassie, of the secrets she still hides and the battles with her overbearing soon-to-be-mother-in-law, all as she faces a week-long string of festivities for a wedding she’s not sure she deserves. Then there is the story of Cassie’s mother, cast adrift after the death of her daughter and the continued absence of her son, as well as the growing distance between herself and her husband. Together, these characters and the character around them slowly share their stories, their grief, hurts and regrets. And together, they slowly find the grace to forgive – each other, but especially themselves.

I’ve never met a group of people so reluctant to talk to each other. Or even just to talk at all. Especially when they are all thinking the same thing. Things Left Unsaid is a complex and deeply layered story. It took me a little while to get truly hooked by the story and the characters. At first, only vague hints about the past and ‘that night’ are shared. It’s not until a little over halfway through the story that the characters, finally, finally start stalking. And that’s when things start to get interesting. As they each begin to unburden themselves and share their pain.

Things Left Unsaid is a story about love – romantic love (there is a wedding in this book after all, as well as a story of second-chance love), and love between friends and family. It’s a touching and encouraging story about forgiveness and learning to live.