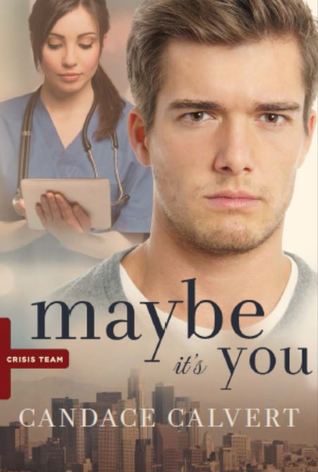 ER nurse Sloane Ferrell escaped her risky past–new name, zip code, job, and a fresh start. She’s finally safe, if she avoids a paper trail and doesn’t let people get too close. Like the hospital’s too-smooth marketing man with his relentless campaign to plaster one “lucky” employee’s face on freeway billboards. Micah Prescott’s goal is to improve the Hope hospital image, but his role as a volunteer crisis responder is closer to his heart. The selfless work helps fill a void in his life left by family tragedy. So does a tentative new relationship with the compassionate, beautiful, and elusive Sloane Ferrell. Then a string of brutal crimes makes headlines, summons responders . . . and exposes disturbing details of Sloane’s past. Can hope spring from crisis?

What would you do for a fresh start when you don’t think you deserved one? Maybe It’s You is the heartbreaking and hopeful story of second (and third and fourth) chances, facing your past, grace and love. Maybe It’s You has Candace Calvert’s trademarks of romance, medical tension, drama, action, and heartwarming stories of the people who give of themselves to keep others safe.

At the start of Maybe Its You Sloane has moved away from San Diego to LA. She has changed her name and tried to cut all connections to her past. But a string of violent crimes and the hospital’s own marketing campaign seem ready to out her hidden secrets. And the handsome marketing man, Micah isn’t helping.

Micah and Sloane are set to clash right from the start. He is looking to find the face of LA Hope while she wants to stay safely hidden. He despises drunks after one killed his cousin, she is a recovering alcoholic. She lashes out at anyone who dares to get close, he knows there is more to her story. She hates condescending observers who have never experienced life’s turmoil and he seems to fit that description exactly. But as tragedy keeps striking, Sloane discovers there is more to Micah than suit and polish, like volunteering for the crisis responders team and a history that has left him hurting.

Their romance starts off with an antagonistic confrontation, moves on through fear and threats to resigned tolerance and then friendship and only gets more complicated from there. A great love story that displays the value of compassion and understanding.

There is plenty of tension in this book, both in the medical setting and outside of it. Attempted kidnappings, shootings, mafia, sex trafficking, and all seemingly tied back to Sloane. Her journey includes discovering faith, relearning who God is and how He could love her, even when she doesn’t think she is worth loving or forgiving. Micah, too, has his own trauma to work through.

Maybe It’s You is a great addition to the Crisis Team series. I didn’t love it as much as I did the previous two books, a bit too traumatic perhaps, but it still has that winning combination of action, drama and romance, all tied up with a heartwarming faith journey.