Here are the books due for release in September 2015 that have made it onto my to-read list. Click on the covers for detailed reviews.

This is an outstanding debut, charming, funny, unbelievably moving and a deep sort of soul searching.

Silas Hart has seriously shaken up Westlin Beck’s small-town life. Brand new to town, Silas is different than the guys in Green Lake. He’s curious, poetic, philosophical, maddening– and really, really cute. But Silas has a sister– and she has a secret. And West has a boyfriend. And life in Green Lake is about to change forever.   Full review.

Book Two in the Spark series. Evie is a Shield: designed to kill in order to protect, and the Affinity Project have finally come for her. But Evie isn’t ready for the sinister organisation to take control of her life, her body, her mind. She isn’t ready to follow their rules about who may live and who must die – not when it condemns the innocent. She has one option: risk losing everything and everyone – including Jamie – and run.

A harsh and expressive book about friendship. Both confronting and endearing.

Breakaway is about four boys who are friends, but as their final year of high school progresses they realise they don’t really know why they are close or what they have in common. Full review. 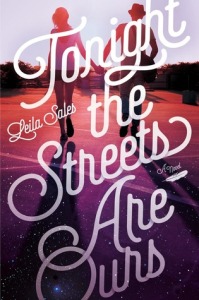 Tonight the Street Are Ours – Leila Sales – Farrar, Straus and Giroux – Published 15 September 2015

Seventeen-year-old Arden Huntley is recklessly loyal. Taking care of her loved ones is what gives Arden purpose in her life and makes her feel like she matters. But she’s tired of being loyal to people who don’t appreciate her—including her needy best friend and her absent mom.

Arden finds comfort in a blog she stumbles upon called “Tonight the Streets Are Ours,” the musings of a young New York City writer named Peter. When Peter is dumped by the girlfriend he blogs about, Arden decides to take a road trip to see him.

Self-proclaimed fat girl Willowdean Dickson (dubbed “Dumplin’” by her former beauty queen mom) has always been at home in her own skin. Her thoughts on having the ultimate bikini body? Put a bikini on your body. With her all-American beauty best friend, Ellen, by her side, things have always worked . . . until Will takes a job at Harpy’s, the local fast-food joint. There she meets Private School Bo, a hot former jock. Will isn’t surprised to find herself attracted to Bo. But she is surprised when he seems to like her back.

A bird may love a fish, but where would they live? Reading The Weight of Feathers was like entering another world, part fantasy, part dream-like childhood holiday and part small town romance. It was the perfect combination for an intriguing, magical and original novel. Absolutely breathtaking.

For twenty years, the Palomas and the Corbeaus have been rivals and enemies, locked in an escalating feud for over a generation. Both families make their living as traveling performers in competing shows—the Palomas swimming in mermaid exhibitions, the Corbeaus, former tightrope walkers, performing in the tallest trees they can find. Full review.

And so begins a new series by the great Denise Hunter.

Eden and her son are running for their lives. When their car breaks down in Summer Harbor it seems like nothing but bad timing and even worse luck, but it does result in them meeting the Callahans – three brothers and their much-loved but ornery Aunt Trudy. Beau Callahan is in need of someone to look after his aunt while she recovers from a fractured leg. Beau is busy managing the family’s Christmas tree farm, and Eden is in desperate need of a job and somewhere to stay. As Eden and her son are enveloped by the Callahan family they learn what safety feels like, but danger is following closely behind them. Full review.

In Last Chance Hero readers are returned to the little New Mexico town of Last Chance, where the chilli is hot and football is everything. This was a fun and sweet contemporary romance.

Last Chance is everything Dr. Jess McLeod dreamed when she decided she wanted to open her own medical practice in a small town. She just wasn’t quite prepared for the everyone-knows-everyone reality of small-town life, nor how a non-football-loving, non-chilli-eating Californian female doctor would stand out like a sore thumb. But Jess isn’t the only new face in town. Andy Ryan, Last Chance native and local boy made good, has finished with his NFL career and has returned to coach the high school football team. Despite their obvious differences (namely indifference/love toward football), Jess and Andy form a fast friendship, but aren’t sure if they have what it takes to move their relationship to the next level or if their differences will keep them apart.  Full review.